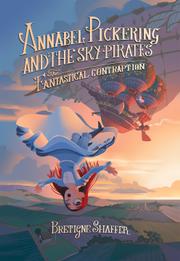 ANNABEL PICKERING AND THE SKY PIRATES

A teenager goes on the run and flies with pirates in this middle-grade Victorian steampunk adventure.

Thirteen-year-old Annabel Pickering lives in an alternative history version of Victorian England, where all mechanical devices are steam-powered and airships flood the skies. Annabel is from the upper classes. She attends an elite girls’ school and from an early age has taken riding lessons. Her parents are both scientists. Annabel believes in England’s greatness and the sanctity of the queen. She’s never questioned the status quo. But then her parents are abducted—not even formally arrested—by the police. Suddenly everything changes for Annabel. She is forced to hide with the odd spinster from down the street (Miss Doubtweather) and her nonverbal niece and take flight with a crew of rough-but-kind pirates. Miss Doubtweather, it turns out, is part of a secret society of freethinkers, to which Annabel’s parents also belong. The pirates are more accurately smugglers; breaking the law, yes, but upholding their own moral code. The more Annabel sees, the more she must question her assumptions. But where will this get her? Will Annabel escape the Queen’s Guards and rescue her parents or spend the rest of her days in prison? Shaffer (Urban Yogini, 2017, etc.) writes in the third person, mostly from Annabel’s point of view but also from other characters’ perspectives when she isn’t present. Annabel is a naïve protagonist and tends to follow rather than lead the plot. But she is courageous, determined, and can think for herself. All told, she makes a good guide to the steampunk setting. This tale is well described and very imaginative, featuring not merely the standard elements, but also several novelties (such as the fabulous notion of using liquid to store information). To a large extent, this series opener focuses more on worldbuilding than storytelling, but the action does heat up, and the pirates in particular come into their own (albeit while talking in heavy buccaneer accents that can be a bit off-putting). A smattering of high-contrast, black-and-white illustrations by Garbay (Le Voyage Extraordinaire, 2019, etc.) adds to the impression of Victoriana. Though not entirely satisfying as a stand-alone adventure, this volume has enough captivating material to draw middle-grade readers into the series.

An engaging introduction to a world of wonder and intrigue.