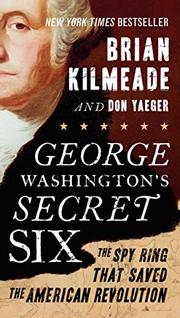 A history of the Culper Spy Ring, without which, the authors argue, the Americans would not have won the Revolutionary War.

Nathan Hale was America’s first spy, and his execution forced Gen. George Washington to find a man who could develop a spy ring to help him drive the British from New York. Fox & Friends host Kilmeade (It's How You Play the Game: The Powerful Sports Moments that Taught Lasting Values to America's Finest, 2007, etc.) and Yaeger (Greatness: The 16 Characteristics of True Champions, 2011, etc.) were fortunate to have the research of Morton Pennypacker. He was Long Island’s premier historian and the man who, in 1929, identified the group’s most important member, Robert Townsend (1753–1838). Maj. Benjamin Tallmadge was Washington’s choice to develop his spy network, and the six spies he recruited had an immense effect on the outcome of the war. The first task was to invent pseudonyms, and they established codes and solid back stories, used dead drops and compartmentalized intelligence. The work they did in Manhattan and Long Island exposed not only a British attempt to destroy the American economy, but also Benedict Arnold’s treachery. In one of their final acts, they managed to get the British naval codebook, an act that turned the tide at the Battle of Yorktown. In the five-year period during which the ring operated, only one of their members was exposed. That she was a woman is the only clue to her identity, though there’s a suggestion that she hung her laundry in such a way as to pass information on troop movements. While Kilmeade and Yaeger don’t provide deep analysis, the narrative should please enthusiastic fans of the upheaval surrounding the founding of the United States.

In a slim, quick-moving book, the authors bring attention to a group that exerted an enormous influence over events during the Revolutionary War.

ALL THE WAY
by Joe Namath
Nonfiction

ANY GIVEN MONDAY
by James R. Andrews
Nonfiction

NOTHING TO LOSE, EVERYTHING TO GAIN
by Ryan Blair
Nonfiction

I BEAT THE ODDS
by Michael Oher
Nonfiction

TORIES
by Thomas B. Allen
Children