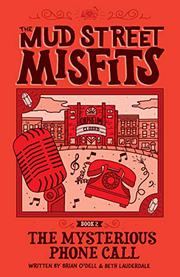 In O’Dell and Lauderdale’s (The Girl in the Blue Tie-Dye Shirt, 2018) middle grade sequel, the Mud Street Misfits take on their town’s mayor in order to save a treasured building.

Preteen Sarah Barrett was left on the steps of the Santa Monica Public Library as an infant. Now she lives in small-town Ozark, Missouri with her adoptive parents, Heather and Rachel, and her younger stepbrother, David. She and David are members of the Mud Street Misfits, along with their friends Connor Harrison and Liam and Molly MacLeod. Recently, Liam hit his head and developed psychic powers; the Misfits’ ensuing adventure brought them inside the abandoned Ozark Orpheum, which hosted live music for decades but now lies in decay. Sarah has learned that Rachel is joining a Chicago law firm, which is devastating news; the family has already moved frequently, and Ozark is the first place that truly felt like home to her. After discovering that Ozark’s Mayor Scott plans to demolish the Orpheum in just two weeks, Sarah looks into how to get the building certified as a historic site, due to its age, condition, and significance. The kids sneak back into the Orpheum to find something that will convince City Hall to reconsider. In the building’s attic, they find a steamer trunk full of costumes, and, strangely, a black rotary phone that provides Liam with psychic visions—and later does something else that’s unexpected. With the help of writer Steve Lewis, who once wrote about the Orpheum for The Ozark Trail magazine, and Cora, their psychic friend and crystal expert, can the Misfits save a building that’s full of powerful memories?

O’Dell and Lauderdale again depict the passionate moral clarity of youth, which can be challenging to carry into adulthood. Sarah’s melancholy character and resulting motivations give her a compelling narrative arc: She wants to save the Orpheum because she can’t save her place within the Misfits. At one point, she feels “as if she had no physical substance and was suspended above the earth by a tenuous thread”; music helps her, however, as it can “take her to another world.” Her loving parents, Rachel and Heather, who are “committed to each other and to creating a family,” are portrayed with matter-of-fact positivity. The author again supplies his young target audience with tastes of both science and spirituality, as when Cora, in a discussion of ghosts, quotes Albert Einstein, notes that “Energy cannot be created or destroyed.” The Hindu concept of chakras—energy centers in the body—comes up in a scene in Cora’s crystal shop; the proprietor offers Sarah a piece of kyanite, which she says will help relieve stress in the girl’s throat chakra, allowing her to “speak [her] truth with clarity.” This installment focuses mainly on Sarah, as the previous one did on Liam and Connor, giving the series a buoyantly episodic feel, and Ozark, with its haunted corners and inquisitive Misfits, continues to be a wonderful place to visit.