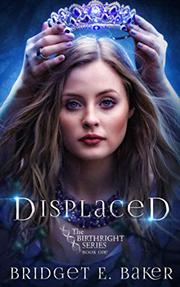 A superhuman teen heiress must survive first love and her twin sister’s homicidal ambitions in this novel.

Seventeen-year-old Chancery Alamecha is an evian, a member of a genetically pure race in which humans are a corrupted subset. Evians can live for up to a millennium. They are faster and stronger than humans and can heal themselves from all but the most severe injuries. Chancery’s mother is almost nine centuries old and is ruler of one of the six evian families, to which human leaders pay obeisance. Evian succession defaults to the youngest daughter—in the case of the Alamecha family, Chancery’s twin sister, Judica. Chancery and Judica look alike but have very different personalities. Whereas Chancery is compassionate, Judica is cold and cruel. While Chancery daydreams about living in the human world, Judica trains in single combat (the evian way of settling disputes) and remains consumed by hatred for her sister. The protagonist has no ambition, but when her mother is murdered, having just changed her heirship document to name Chancery, everything changes. More than ever, Judica wants Chancery dead. Chancery must face her in a duel to the death or live forever in exile. She has 10 days to decide. She chooses to spend this time in New York, training with Edam, Judica’s former bodyguard, for whom Chancery has more than a crush, and attending a human school, where she meets Noah Wen, the debonair youngest son of a Chinese magnate. Will Chancery return to face certain death at the hands of her sister? And who will win her heart, Edam or Noah? In this fantasy romance series opener, Baker (Finding Liberty, 2019, etc.) writes simply but effectively in the first person, present tense. The evian world is immediately compelling, emerging naturally from the story and offering some nice points of difference from the more standard fantasy fare of elves and vampires. Chancery is a relatable protagonist, and the other characters remain distinct without drawing too much from stock types. The genre mix is not without issue—for some, the romance and fantasy intrigue will make uneasy bedfellows—but nonetheless the story swiftly progresses, deftly playing to the escapism desired by YA and new-adult readers.

A fast-moving, engaging tale in what promises to be an epic fantasy romance series.

HOW TO LOVE YOUR ELF
by Kerrelyn Sparks
Newsletter sign-up