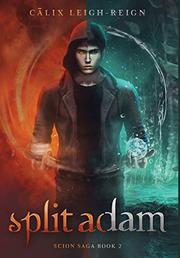 Teenagers with supernatural abilities band together in the face of threats in this second installment of a series.

Sixteen-year-old Adam Rozovsky is one of the Descendants, who boast paranormal abilities. Adam can control wind while his girlfriend, Carly Wit, manipulates fire. Unfortunately, the Iksha, a group of scientists seemingly intent on “harnessing” the Descendants’ traits, have been experimenting on and sometimes killing them. Adam, Carly, and other Descendants are currently hiding in the city of Piure. Sorceress Ksenyia Levkin tries to protect everyone by hexing the entire city to prevent enemies from entering. In some ways, the Descendants are quintessential teens, attending high school and eagerly anticipating the prom. But they must remain on guard, particularly after it’s apparent that a traitor among them is feeding information to the Iksha and, later, that a spy has somehow made it inside Piure. But perhaps most unnerving are the changes Carly notices in Adam. He exhibits unusual behavior that he subsequently forgets, leading Carly to speculate that his personality has split. Looking for a solution to her boyfriend’s condition, Carly stumbles on a shocking discovery that may mean the Descendants’ shielded city is not the safe haven they believe it to be. This SF sequel picks up right after the series opener, with a thoroughly established plot and myriad characters. Readers unfamiliar with the first volume may initially be confused, but Leigh-Reign’s (Opaque, 2016) crisp dialogue is simultaneously entertaining and brimming with details. Despite the Descendants’ powers and a blatant comparison to Marvel’s X-Men, the story offers minimal action, as the teens’ abilities are primarily on display during a tournament. Nevertheless, characters’ many interactions spark searing melodrama as well as suspense. There’s a lingering distrust, for example, with the presence of a potential mole while an eventual betrayal threatens more than one relationship. Moreover, the author adds a twist before the halfway point and another during the final act, which unquestionably sets up Book 3.

An engrossing SF tale that aptly solidifies a dense saga.