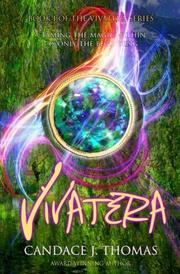 In this first book of a high-fantasy series, Thomas (Conjectrix, 2012) takes readers on magic-fueled adventure.

Just when Naomi’s bold actions look like they might get her into trouble, she’s swept away by a mysterious stranger. Her friend Zander isn’t so lucky: The prince of Parbraven’s guards capture him. While Naomi and Reynolds, the stranger, make a daring, dangerous escape, Zander suffers at the hands of his captors, only to be rescued by the prince himself. For Naomi’s safety, Reynolds leaves Naomi with a group of young people who, like her, are struggling to understand and tame the magic that lives within them. But Naomi isn’t as safe here as Reynolds had hoped. When danger threatens Zander’s new royal friends, he sees his chance to step up and be a hero, risking his own life to do so. Zander’s and Naomi’s lives are intertwined with magical stones, and one in particular that holds great power, the Vivatera. The stones and the greed they inspire bring both power and danger to those who possess them. As the first book in a planned series, this novel lays the groundwork for future works by explaining the back story behind this fantasy world and the magical rules that govern it. Naomi and Zander are still young and unsure of themselves, and the dangers they face are grave, but success in the face of adversity helps boost their confidence. The beginnings of a love story between Naomi and the somewhat conflicted Reynolds can be seen, as the familiar fantasy tropes of magic amulets, unknown ancestry and untapped powers pop up in this novel that thankfully eschews flowery language. What the story lacks in originality, it more than makes ups for in solid storytelling, despite its lack of adult subjects and language. Young readers are perhaps less likely to notice the rehashing of familiar fantasy elements.

THE STONES ARE HATCHING
by Geraldine McCaughrean
Newsletter sign-up