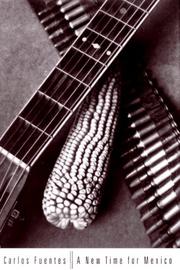 A NEW TIME FOR MEXICO

Desultory essays, mostly uninspired, on Mexico, following closely behind the noted author's execrable roman it clef Diana (1995). Updating his Tiempo Mexicano (Mexican Time), a vigorous examination of the wrongs of Mexico's political and economic system of the 1970s, this collection offers a few highlights worthy of the Fuentes of old, He is an incisive student of the differences that divide Mexicans and Americans: Conceptions of the marketplace and of individual liberty; ideas, as the title suggests, of time itself, exemplified by the term manana, which "does not mean putting things off till the morrow. It means not letting the future intrude on the sacred completeness of today." Fuentes has much to say on the cultural complexities of Mexico, on the likelihood that the NAFTA accord will fail, on the stranglehold a corrupt central government has on a country that should by all rights be both wealthy and internationally influential, on the ever-declining "Mexican miracle" promised in the oil-rich '70s. But noteworthy passages are too few and far between. Rather than connect his themes and make a definitive statement, Fuentes is mostly content to issue vaporous pronouncements: "To see Mexico from the air is to look upon the face of creation." "Only the Revolution made present all of Mexico's pasts--that is why it deserves a capital R." "The Indians of Mexico are the only aristocrats in a country of provincial imitations, shabby colonial hidalgos, haughty republican Creoles, and corrupt, cruel, and ignorant revolutionary bourgeois." The reader will be forgiven for wondering why a Mexican Indian, the poorest of Mexico's poor, should feel aristocratic, but Fuentes should not be forgiven for this altogether silly rhetorical device. In the end, Fuentes refuses to make a clear, definitive statement on the crises facing Mexico, a sad thing in a writer who once made his country comprehensible to the world.
Pub Date: June 1st, 1996
ISBN: 0-374-22170-7
Page count: 214pp
Publisher: Farrar, Straus and Giroux
Review Posted Online: May 20th, 2010
Kirkus Reviews Issue: April 15th, 1996

A NEW TIME FOR MEXICO
by Carlos Fuentes
Fiction

THE CAMPAIGN
by Carlos Fuentes
Fiction

THIS I BELIEVE
by Carlos Fuentes
Fiction