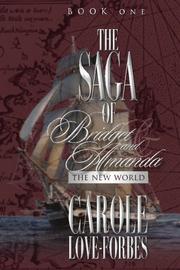 THE SAGA OF BRIDGET AND AMANDA

Young women in the 17th century struggle to rise above religious oppression, gender inequality and personal misfortune in this debut historical novel.

This tale’s three sections offer three interwoven but distinct stories. It opens with Bridget Wodehouse, a prosperous English young lady of minor nobility, being kidnapped and thrown aboard a ship bound for the New World. She finds herself with other unfortunate young women headed for indentured servitude in Massachusetts. Devastated and hopeless, she meets a few kindred spirits during the trans-Atlantic crossing who will become sources of help and inspiration in her new surroundings. When she finally arrives in New England, things are even worse than she expected: she’s sold to become the wife of a foreboding, unforgiving Puritan widower. Forbes details the next several years of Bridget’s difficult but engrossing life, providing several intriguing details about Puritan customs along the way. She also provides her with a beacon of hope in the form of Rachel, a baby girl born of her miserable marriage. As Rachel matures, she seamlessly becomes the protagonist of Forbes’ second tale, struggling with her own demons and challenges. Later, the narrative goes in a third direction, telling the story of one of Bridget’s shipboard friends, another beautiful young captive named Amanda McNeely, who was also sold into marriage, and her lot is far worse than Bridget’s. Forbes uses the story of each heroine to call into question the hierarchies and mores of the New World’s emerging societies. Throughout this captivating novel, she provides real-life historical characters, such as the controversial spiritual adviser Ann Hutchinson, and relevant historical facts, from the Puritans’ religious austerity to their tense relations with Native Americans. Overall, she allows readers to get lost in the story while also learning a bit about America’s past.

A gripping tale of loss and hope that will particularly appeal to champions of women’s rights.