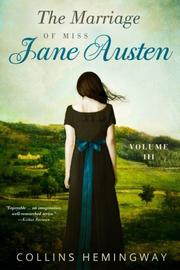 THE MARRIAGE OF MISS JANE AUSTEN

Jane Austen struggles under the burden of loss in the final volume of Hemingway’s (The Marriage of Miss Jane Austen: Volume II, 2016, etc.) trilogy.

In the first two installments, Hemingway reimagined the author Jane Austen as a young mother and wife, filling in the missing years of her historical record. Jane has adapted to marriage and the running of a household and acquired wealth and pregnancy; now, she’s exhausted. Her new son, George, requires her complete attention, and her relationship with her husband, Ashton, is at an all-time low. George also suffers from seizures, which triggers difficult conversations about inherited conditions on Jane’s side of the family. When tragedy strikes, Jane flees to that family, seeking refuge from her marriage and her sorrow. Her profound anger and sadness are incredibly moving, as Hemingway offers a more humanized version of Jane Austen than readers may be used to. She’s not the mysterious and gifted writer they know but a mother and wife haunted by loss, desperately seeking a path forward. Ironically, it’s death that finally brings Jane back to life and allows a reconciliation with Ashton. Determined to stay with him this time, Jane joins her husband and the British Army, who set sail for Spain to fight Napoleon Bonaparte’s forces. As the couple encounters new places and old enemies (the Lovelaces, last seen in the previous installment, reappear here to Jane and Ashton’s detriment), they’re continually faced with the terrible cost of war. After a long physical and emotional journey, Hemingway leaves us with Jane the writer, who takes back her voice after losing so much in her life. Although sorrow sweeps through much of this story, Hemingway’s thoughtful, well-written book also offers an incredibly moving portrayal of a young woman confronting love and loss. The narrative also touches on the political, technological, and cultural changes of the early 19th century, but the most successful portions involve the evolution of Jane as a woman and a writer. In the end, she muses, “I cannot go on as if nothing has changed, but I can go on.”

Tragedy makes Jane Austen more relatable than ever in this concluding installment.

TEACH ME HOW TO DIE
by Joseph Rauch
Indie

IT IS ABOUT YOU
by Deborah Cupples
Indie

THE LOST MEMOIRS OF JANE AUSTEN
by Syrie James
Mystery