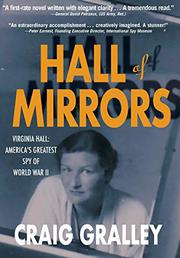 This debut tells the story of Virginia Hall, an American spy for the Allies in World War II.

Hall (1906-1982) was a real woman and an amazing one. But rather than tell the story as straight history, Gralley has chosen to turn it into a novel with Hall as the protagonist and first-person narrator—an inspired decision. As if her life would not prove challenging enough, early on, Hall lost her lower left leg in a hunting accident. As a result, she gained an intimate lifelong companion, a wooden prosthesis that she named Cuthbert. It was, needless to say, a love-hate relationship. She would sometimes encourage Cuthbert, but more often, she would berate him. Hall spent the early years of the war under various guises as a spy based in Lyon. The northern half of France was German occupied; the southern half—the Vichy government—was also under German control but existed under the thinly veiled illusion that it was free. Danger was a constant. Right off the bat, Hall’s “pianist,” her “covert radio operator,” was found out and killed. The high point in the story is her escape into Spain, trudging over the Pyrenees in winter, the Gestapo hot on her trail. There is no question that Hall was indefatigable. But Gralley’s treatment really brings that aspect home. We get to know Hall firsthand, in all her tortured and scary moments. What pervades the novel like a miasma is the sensation of being a spy, a deceiver, to be always—always—on guard. She has the human feelings that we all have, but she cannot indulge them, and this, too, eats at her. The fact of Cuthbert has shut off avenues to advancement, but there is also the fact that she is a woman. Time and again she has to prove herself (and prove herself she does), but it seems never enough until a final triumph. She receives commendations from Britain and her own country but dodges the accompanying ceremonies, having further work to do.