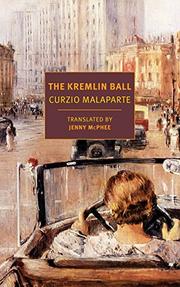 The czar is dead. Long live—well, the Stalinist successors of the czar and his court, as proficient as their predecessors at feathering their nests.

“I thought all bloodstains were washed away in Russia”: so, on finding the contrary, marvels Malaparte (The Bird That Swallowed Its Cage: The Selected Writings of Curzio Malaparte, 2012), the German/Italian writer who had the dubious distinction of being on the enemies lists of Mussolini, Hitler, and Stalin alike. Malaparte may just be the original postmodernist, at least as far as genre-crossing is concerned: his journalism reads like fiction, and his fiction like journalism, and no cataloger can ever be quite sure of where to shelve books such as his best-known work, Kaputt (1944). So it is with this book, which he prefaces with the remark that “in this novel…everything is true: the people, the events, the things, the places.” Why a novel, then? Well, Malaparte has been dead since 1957, so it must remain a mystery, except to hazard that just as Kenneth Rexroth called his true An Autobiographical Novel such to get the lawyers off his back, Malaparte may have been hoping to lessen the wrath of the Politburo. He needn’t have tried, for from the opening page there’s plenty here to sustain the ire of an apparatchik. Malaparte begins by lampooning the “communist nobility,” a demimonde of high-heel–clad actresses and vodka-guzzling cultural commissars. Within a few dozen pages he has evolved into a political philosopher, noting—and worth considering for our own time—that the downtrodden masses will support tyrants beyond all reason, albeit “the torment that oppresses the masses in a revolution is their obsession with betrayal.” Others who appear here have different obsessions, among them the quietly subversive novelist Mikhail Bulgakov, who tells Malaparte, “I am afraid of Christ,” even as Malaparte later reckons that the greatest sin of the proletarian poet Vladimir Mayakovsky was that “Mayakovsky believed in God.”

A head-swirling kaleidoscope that, though fictional, is never for a moment fictitious.

A MAN OF NO MOON
by Jenny McPhee
Fiction

THE CENTER OF THINGS
by Jenny McPhee