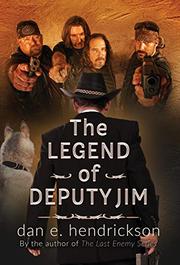 THE LEGEND OF DEPUTY JIM

Wyoming sheriff’s deputy Jim Edwards defends hearth and home from a gang of violent bikers in this neo-Western.

In the present day, a small crowd has gathered at the Rainbow Bar in Sheridan County, a tighknit corner of Wyoming nestled against the Bighorn Mountains, to hear the legend of Deputy Jim. The narrator takes the tale back to the early 1970s, when Jim is a young law enforcement recruit with a local reputation as a tenacious boxer and an affable family man. He proves himself early on in a protracted struggle between the sheriff’s department and the Wild Wolves, a violent biker gang with ties to Mexican drug cartels. As the conflict escalates, Jim exposes a widening web of corruption, which includes high-ranking members of the state government. Jim’s attention to detail, inherent toughness, and persistent pursuit of the truth earn him several comparisons to Dick Tracy from his colleagues. The bikers, led by notorious thugs Grinder and Pack Leader, hate to be bested, as do their cartel backers. As a result, they grow increasingly violent—hiding out in the mountains and swooping through town on campaigns of crime and intimidation. But after they kidnap Jim’s colleagues and threaten his wife and young son, they find that they’re up against a formidable enemy. As in any Western worth its salt, this story’s conclusion includes a scene of climactic violence, and it’s an action-packed sequence including several horseback riding officers of the law. In action scenes, Hendrickson (The Last Enemy, 2019, etc.) shows a knack for exciting pacing. Elsewhere, however, he can fall into excessive summary, as when he concludes a section with this passage: “For the rest of the winter of ’73-’74, Jim plays it cool, professional, and low key, but he still does his job very well.” Jim is ultimately an uncomplicated hero—responsible, protective, and brave to a fault—but in a classic, heroic cowboy way, which can be endearing.

A fast-paced, if slightly uneven, Western tale, told in a plain style.