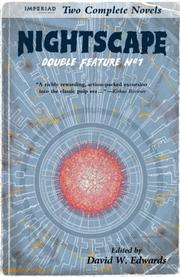 Two novellas set in the world of the 2012 Nightscape movie.

Both tales in this dual-novella package are set in a supernaturally tinged world that’s provided the basis for a 2012 feature film (written, produced, and directed by Edwards), comic books, short stories, novels, and even an album. However, these novellas aren’t merely for fans, as they’re both completely accessible as action-adventure tales, squarely in the tradition of the pulps. The Thousand-Eyed Fear by Derrick Ferguson (Search for the Beast, 2016, etc.) and Edwards (Nightscape: Cynopolis, 2015, etc.) is the more successful of the two; it centers on the unlikely partnership between Capt. William Davenport of the British Third Army, a hardheaded Anglican realist, and the Lost Boys, a group of teenage soldiers who are self-professed masters of the arcane. It’s 1917, and their goal is to find and destroy a diabolical new weapon that the Germans are developing to bring the war to a cataclysmic end. The second story, The Q for Damnation, by debut author Arlen M. Todd, is set on the eve of World War II, with the Nazis on the brink of a breakthrough in dark magic—this time, in the form of a classic painting with supernatural potential. Opposing them is the young Frenchwoman Monteau, who’s depicted as a fascinating blend of resistance fighter and Batman-like superhero. As in its predecessor, the narrative in this tale relies heavily on breakneck pacing and a rapid-fire succession of plot twists. In both novellas, the authors offer plenty of engaging examples of full-throated pastiche, including moments of high-fantasy overwriting that might have had Robert E. Howard, creator of Conan the Barbarian, grinning with pride: “All of his brother monks had degenerated into bestial dreamshapes. They stirred about, driven by blind instinct or vestigial habit, pursuing the swimmy visions in their heads.”

A richly rewarding, action-packed excursion into the classic pulp era, delivering a combination of eldritch villains and overmatched but valiant heroes.