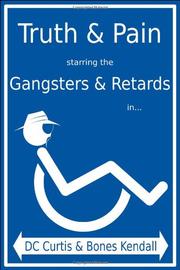 A gaggle of disabled and otherwise different teens have their friendship tested by jealousy and hip-hop exclusionism in this gonzo young-adult fable.

Handicaps are spectacular but never encumbering among the students at the Green Rainbow Acres State School, located at the allegorical intersection of Truth Ave. and Pain St. in the slum district of Valley City. Bryan has Down syndrome, but he’s quick-witted and deep. Janice doesn’t let her muscular dystrophy get in the way of her high-falutin’ speechifying. Carlos, who has lost three limbs to three separate freak accidents, uses his toes to invent electronic gadgets. Moon is a black-belt in Aikido and a sound-and-lighting engineer for stage shows despite being deaf, mute and blind. Then there are the socially and psychologically disadvantaged: Mad Girl, truculent and pregnant; Learoy, truculent and pretty; Pho, huge and gentle; Dutch, white and stupid. Their tight, multicultural, stridently tolerant clique is disrupted by wheelchair-bound rap star MC Crippled Crip; while Janice and Learoy fall to cat-fighting for MC’s affections, Carlos, who complains that a Mexican-American rapper like himself can’t get a hearing in the hip-hop industry, insists that MC is a fraud who stole his lyrics. (Sample plagiarism: “Girl with that ass of yours / You won me from the start.”) The book’s somewhat cumbersome and avowedly silly narrative—“Beware, Mateys! Here thar be plot holes!”—functions as a lurid peg for eternal adolescent-lit themes: phoniness and authenticity; tensions between personal ambition and solidarity with friends; vague anti-establishment resentments; the centrality of rap culture to self-expression and group bonding. The writing, vigorous and suffused with urban rhythms but also coarse and platitudinous, soaks readers in profanity, flights of fancy (a Carlos-Crip showdown is staged as a faux-Clint Eastwood gunfight), bland moralizing (“‘It’s all about trust’”) and a nigh-obsessive ogling of Learoy’s bodacious (and underage) breasts and booty. The result is an imaginative, quirky read, but it’s so cartoonish that it doesn’t quite ring true.

An exuberant but overblown tale of miraculous misfits.