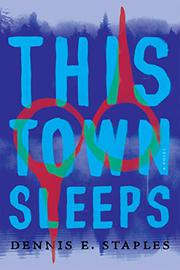 A young gay man reckons with love, tribal lore, and a decades-old murder in this rangy debut novel.

Marion, the main narrator of Staples’ first book, isn’t where he wants to be, and that’s back in his hometown on Minnesota’s Ojibwe reservation. A brief stint in the Twin Cities ended with busted relationships, but his best romantic prospect in the area is deeply closeted former high school classmate Shannon, who has the unglorious job of attending to animal carcasses on a resort island. Still, Staples, an Ojibwe writer, wants to suggest that the best way to move forward is by facing one's past head-on. The notion arrives first via symbolism: As children, Marion and his friends spooked each other by saying a dog died under the merry-go-round at the playground, and now that dog reappears (or seems to) in Marion’s presence. That incident sparks Marion’s investigation into his high school days, in particular the murder of Kayden, a basketball star who became a father shortly before he was killed. Plotwise, the story is a stock hero’s-journey tale, as Marion lets go of his skepticism of Ojibwe spiritualism, discovers the truth about Kayden’s death, and finds a community along with a degree of emotional fulfillment. But credit Staples for complicating the story in some interesting ways, from shifting perspectives from Marion to other townspeople (with a particular emphasis on Native women), a smirking humor that cuts the mordant atmosphere (“What do Indians call a lack of faith?” “Being white”), and a graceful handling of Ojibwe culture. In its later stages, the story seems to keep sprouting tentacles as new characters and revelations emerge, which saps some of its narrative drive, but it returns affectingly to the messy fates of Marion and Shannon.

A knotty portrait of Ojibwe life with some winningly uncanny touches.