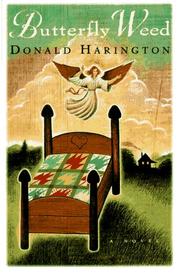  Inspired, playful storytelling from one of our most consistently original (and impish) novelists (Ekaterina, 1993, etc.), who now returns to his Ozark version of Shangri-la--the village of Stay More, a place hard to find but infinitely harder to leave. Harington's series of novels about this fictional Arkansas community (The Choiring of the Trees, 1991, etc.) and its eccentric population (``Stay Morons'') has been distinguished by an idiosyncratic blend of lovingly rendered detail (on the language, beliefs, and history of southern mountain life) and wild fantasy. This latest installment, a history of the complex love life and remarkable medical achievements of Doc Colvin Swain, Stay More's ``dreaming Doctor,'' is no different: The title derives from an incident in which a chaste young woman, fleeing an unwanted suitor, is rumored to have turned herself into a butterfly, or a flower, to escape. While the bawdy record of Swain's affairs is at the heart of Harington's crowded, exuberant story, we also get a robust portrait of the doctor's special gifts, his patients, and his times (from the end of the 19th century to the 1950s). Apprenticed as a young boy to a hill doctor, he learns to use both a wide range of herbal remedies and conventional cures. But what really sets him apart is his trancelike ability to visit his patients at night, in their dreams, and to treat them successfully on some nocturnal astral plane. The most painful irony of Swain's career is that beautiful, beloved Tenny (Tennessee), the true love of his life, is the one patient he can't save. She dies, horribly, of tuberculosis. But, this being Stay More, she lingers on as a spirit, watching over Doc, waiting for him. Such material would evaporate in the hands of a lesser novelist. But Harington, an ingenious, wise storyteller and a sly stylist, able to catch the tang and vigor of the spoken word, makes Doc and the other inhabitants of Stay More seem as real as the mountains they inhabit--and also as mysteriously timeless.

FARTHER ALONG
by Donald Harington
Fiction

WITH
by Donald Harington
Fiction