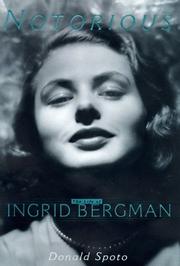  Prolific celebrity biographer Spoto (Rebel: The Life and Legend of James Dean, 1996, etc.) offers an uncritical portrait of the three-time Oscar winner, who epitomized both Hollywood stardom at its most luminous and, for a time, career-hobbling scandal. The author interviewed Bergman in the 1970s and remained an acquaintance until her death in 1982; in addition, he spoke to many family members and colleagues, and he is admirably thorough about the facts. Bergman's childhood was marked by many family deaths, and her early vocation for the theater was quickly diverted to film: By age 22, in 1937, she was the most popular actress in Sweden, and inevitably she was sought out by Hollywood (Spoto rather hurries over Bergman's detour to shoot a film in Nazi Germany in 1938, assuring the reader that she later felt guilty about it). In America, Bergman instantly hit with films like Intermezzo, Casablanca, and Gaslight. Unhappily married to a domineering Swedish doctor who acted as her de facto agent, Bergman had affairs with, among others, photographer Robert Capa and director Victor Fleming. But she was perceived publicly as a model of rectitude until, in 1949, she became pregnant by Roberto Rossellini and relocated to Italy. The ensuing public outcry kept her out of American films for the next seven years: Spoto captures the puritanical fervor of the time, when Bergman was denounced in the Senate as a ``free-love cultist.'' But Hollywood forgave her, and she was universally beloved thereafter. Or so implies Spoto, who is so evidently so besotted by her character and her craft that his analyses tend to be uninformative: ``Ingrid always approached a role simply and without affectation, then went away quietly, memorized the lines and returned--having at some point simply understood.'' Spoto's ardor for his subject, although not unwarranted, crosses the line that separates chronicling the life from prostrating oneself before the dead. (32 pages photos, not seen) (Author tour)

A GIRL'S GOT TO BREATHE
by Donald Spoto
Nonfiction

A GIRL'S GOT TO BREATHE
by Donald Spoto
Newsletter sign-up