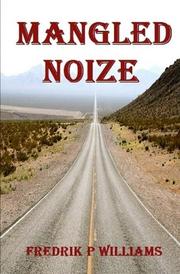 A put-upon teenager runs away from home and winds up traveling the world, living a rock ’n’ roll fantasy in Williams' debut novel.

It takes Frederick Mathews exactly one week to start a new school, get into trouble and find himself homeless. Setting the tone for the rest of the book, an unaffected Frederick spends exactly one night on the streets before stumbling into a band’s practice space and, almost immediately, becoming their new bassist. Despite being sent out on the streets to sell drugs in order to fund the band, Frederick thinks he’s got it made—until he comes face-to-face with the bandleader’s ego during an extended engagement in Japan. The newly christened Fred Noize takes mere minutes to become the force behind a new band, Mangled Noize, whose setbacks and struggles don’t affect Fred in the least. That’s the shame of this book because Fred and Mangled Noize face some real difficulties: being stranded in a country where they can’t speak the language, radio stations in the United States won’t play their songs, a conniving woman thinks getting pregnant by Fred is her lifelong gravy train, encounters with heroin, the requisite hard drinking, and the pain of realizing that six years later, you’re unrecognizable to your own sister. Plum opportunities to build reader empathy through characterization are regrettably ignored. Instead, the book reads like rock star propaganda: the worst part of touring is a smelly tour bus bathroom, the girls are all perfect—and perfectly willing—and on-tour downtime can be spent exploring the city you’re in. This latter reveals one of author Williams’ weaknesses—many details of the rock ’n’ roll life add to the feel of fantasy while detracting from the book’s credibility.

Overpopulated with secondary characters whose presence adds color but not depth, Fred’s adventures are told more than shown, a detriment to what could otherwise have been a very real, poignant tale of a young man who never lets the bad get him down.

I AM OZZY
by Ozzy Osbourne
Fiction

TOO WEIRD FOR ZIGGY
by Sylvie Simmons
Newsletter sign-up