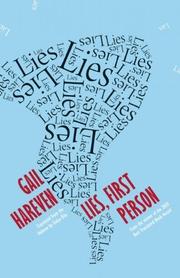 An Israeli woman plots revenge against the relative who raped her sister—and wrote an imagined autobiography of Adolf Hitler besides—in a coruscating novel about faith and family.

Elinor, the middle-aged narrator of the second novel by Hareven to be translated into English (The Confessions of Noa Weber, 2009), lives a comfortable life in Jerusalem with her husband, Oded, and writes a newspaper column about the quirky adventures of an imagined immigrant to the city. Her just-so existence is undone, though, when she learns that her uncle, Aaron, is visiting Israel from the United States. Aaron is making an apology tour for a novel he wrote decades before, Hitler, First Person, and his re-emergence stokes Elinor’s memories of how he repeatedly sexually assaulted her sister, Elisheva, when he was writing the novel in the family home. In the months before Aaron’s arrival, Elinor and Oded head to the U.S. to visit their sons but also take a detour to central Illinois, where Elisheva has started a family, converted to Christianity and—to Elinor’s disgust—not only corresponded with Aaron, but forgiven him. (“She doesn’t want a trial,” Elinor moans to Oded. “She wants him to ascend to heaven with her.”) How much does Elinor owe her sister if she’s moved on? How much did Aaron’s imagination of Hitler’s evil spill over into his own monstrousness? And how much does Elinor’s urge “to see Aaron burn” only perpetuate the problem? Hareven’s novel is a brilliant and careful study of those questions, capturing Elinor’s ever accelerating rage while maintaining a prose style that’s poised and philosophical. The Garden of Eden is a persistent trope in the novel, as Elinor keeps imagining her home as a refuge; but when Oded becomes conscripted into her obsession, it’s clear we remain in a stubbornly post-lapsarian world.

A rich and harrowing novel with plenty to say about religion and authorship.

THE SOUND OF OUR STEPS
by Ronit Matalon
Fiction

THE CASTLE IN THE FOREST
by Norman Mailer
Fiction

THE SOUND OF OUR STEPS
by Ronit Matalon
Fiction

SOMEONE TO RUN WITH
by David Grossman
Fiction