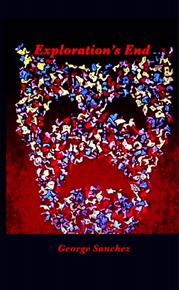 An actor and amateur sleuth returns to the Crescent City to deal with a family complication in this second installment of a series.

Jeff Chaussier has been away from New Orleans for the past few years, plying his trade on the Midwestern theater circuit and trying to keep himself distracted from thoughts of Bryna, the girl he left behind: “Really, it was my reluctance to face her hurt and anger that kept me far up the Mississippi.” Now, his mother and Aunt Marie are worried that Jeff’s cousin Cal, Marie’s son, is in some sort of trouble. He is enrolled at a university, is involved in a theatrical production, and may have a girlfriend. But “his behavior had changed and he had become secretive. He kept odd hours and his comings and goings were erratic and hard to chart.” As Jeff begins nosing around, he finds himself immersed in another chaotic and dangerous caper that includes a very tempting gastronomic tour of New Orleans’ hidden treasures. He seeks help and advice from his family and an impressive array of quirky friends, including an ex-Marine and his wife, also a former Marine, who own and perform in a female impersonator club. Everybody seems to know something but no one offers enough clues to solve the Cal puzzle. And, of course, there’s the beautiful Bryna, whom Jeff finally seeks out only to discover her with a baby girl. He assumes she has moved on without him. Add in drug dealers flooding the city with their wares and a mysterious missing young woman, not to mention an abundance of reasonably tasteful bedroom scenes, and the tale delivers plenty of action to keep the novel engaging. While the story has a few loose threads, Sanchez (Lit by Lightning, 2014, etc.) creates appealing characters and vivid images, his prose elevated by a flair for the absurd: “A cigar and a Marine tattoo did not go well with a blonde wig and mascara, but Tommy was between shows.” Still, many female readers are likely to find Jeff’s frequent playful slapping of Bryna’s naked derriere (she always “yelps”) less than amusing.