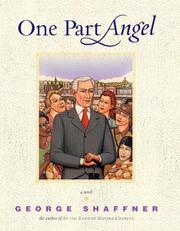 A mysterious visitor returns to a small Nebraska town and turns around its people's lives.

A sequel to Shaffner's In the Land of Second Chances (2004), this novel is told from the point of view of Wilma Porter, owner of the Come Again Bed and Breakfast in Ebb, Neb. As the story opens, Wilma describes how her friend Loretta Parsons, the only black woman in Ebb, was attacked and beaten into a coma by three young masked men, who then vandalized and torched her beauty salon. One of the perpetrators was identified as Wilma's grandson, Matt Breck, who refused to name his accomplices despite the offer of a shortened jail sentence. Almost every position of importance in Ebb is filled by a woman; the town's de facto governing body is the Quilting Circle. The one exception is Clem Tucker, Wilma's fiancé and the richest man in town, who is negotiating a major deal that he expects to change the balance of power in the county. Wilma, believing that only Vernon Moore can save her grandson, prays for his return; almost before she knows it, he appears, in a white Chrysler, wearing a thousand-dollar suit. Soon he is working his quiet magic, the first clear example of which is Loretta's unexpectedly recovering consciousness. Moore quickly wins over almost everyone he meets, although Matt resists him at first. But with a combination of the Socratic method, torture by excessive kindness and banjo playing, he breaks down the boy's resistance. At the same time, he convinces Tucker and the Quilting Circle to come to an accommodation, and finds the real villain behind the beating and arson. While many of the plot twists border on the fantastic, Shaffner's style is folksy and gently humorous.

THE WIDOWS OF EDEN
by George Shaffner
Fiction

IN THE LAND OF SECOND CHANCES
by George Shaffner
Nonfiction

THE ARITHMETIC OF LIFE
by George Shaffner
Newsletter sign-up