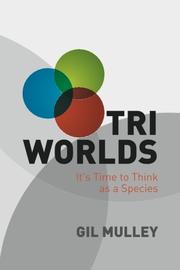 It's Time to Think as a Species
by Gil Mulley
BUY NOW FROM
AMAZON
BARNES & NOBLE
LOCAL BOOKSELLER
GET WEEKLY BOOK RECOMMENDATIONS:

Mulley conveys his species-wide vision of life living on a more stable and peaceful planet.

In a voice that feels heavy with experience yet as plain-speaking as a jury summons, Mulley suggests that humans wise up: even if we are unique individuals, we are all the same physical matter and we are gobbling Earth’s resources faster than they can be replaced. Neither democracy nor capitalism is a self-regulating system, he says; history supports his assertion via popular economic and political critiques by a number of detractors, from Keynes to Thomas Frank, and in the disturbing recent histories of deregulation and trickle-down economics. Furthermore, men need to share leadership with women, otherwise we would lose half the planet’s brainpower and “God will not solve problems we have created for ourselves.” Mulley is not given to digressions, but, fortunately for readers, he likes to root around in his ideas to flesh out his train of thought. The central idea is his tri-world perspective: Existence is composed of the natural world, which we inhabit; the human-made world that we manufacture; and our personal experiential world—what he refers to as the “ethereal world.” Yet too often we have taken the wrong tack in our relationship with each “world” because we fail to think species-wide. Instead, Mulley points out, we often think and act individualistically or within one exclusive world, without a sense of universal, shared obligation—not in a navel-gazing way, Mulley clarifies, but cogently and humanly, with an embracing awareness. His examples are legion: of the natural world, we show no respect for the finiteness of Earth’s resources while we busily squander our natural equity. On the human level, our diverseness is misconstrued as a cause for divisiveness and self-righteousness, rather than as a foundation for the “many beautiful and wonderful things that deserve recognition and elucidation.” Religion, on the other hand, tends to propagate contradicting realms of exclusiveness that downplay the natural and human-made worlds. Mulley’s points are doled out plain as day, in impressively accessible fashion. It’s a persuasive argument for augmenting the value of human caring, reconsidering the distribution of wealth and assuming environmental responsibility. At the very least, readers will realistically, optimistically reconsider the way the world works, as well as his or her place in it—that’s a victory in itself.

An observant, inclusive and empathetic worldview that’s practicable, too, although Mulley admits its fulfillment would be a giant leap for mankind.

THE OTHER SIDE OF EDEN
by Hugh Brody
Nonfiction

IN SEARCH OF ZARATHUSTRA
by Paul Kriwaczek
Nonfiction