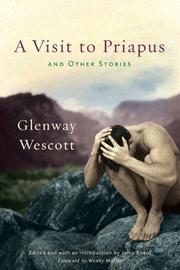 A VISIT TO PRIAPUS

Poet, essayist and acclaimed novelist Wescott (Pilgrim Hawk, 1940, etc.) may not be as familiar to the average reader as many of his contemporaries, but his works live on thanks, in part, to editor and biographer Rosco. The Wisconsin farm boy ascended from humble beginnings to consort with the crème de la crème of literary and political society during the early years of his career. A prolific writer while abroad, Wescott moved comfortably among the expatriate community in Europe during the 1920s and early ’30s and published many of his observations in magazines—often using his fictional alter ego, Alwyn Tower, as narrator. In “Mr. Auerbach in Paris,” he depicts an elderly, sight-impaired Germanophile who laments Germany’s defeat during World War I as he buys copious amounts of French artwork. In the frankly sexual title story, the narrator travels by bus to pursue an encounter with a man who reputedly has physical attributes much like the mythical Greek god Priapus. France’s lack of preparedness on the eve of World War II is the subject of “The Frenchman Six Feet Three.” After donning an ill-fitting uniform and completing two weeks of reserve military service, Roger Gaumond despairingly tells his friends (who are preparing to leave the country) that France cannot survive the coming war without intervention from the U.S. and Great Britain. Also included in this collection is the heretofore unpublished “An Example of Suicide,” a meticulous examination of human thought processes and our belief that, once committed, we must follow through with actions. It’s an excellent story and worthy of inclusion in any top-notch anthology. But other pieces disappoint for their disproportionately heavy-handed, elliptical writing, including the tedious “The Odor of Rosemary” and the blurry “Sacre de Printemps.”

Some pieces are stronger than others. The content of Wescott’s previously unpublished stories may be uncomfortable for some.