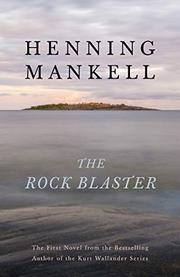 This first novel from the creator of Kurt Wallender (An Event in Autumn, 2014, etc.), originally published in 1973, makes its English-language debut.

A 1911 explosion so nearly kills Oskar Johansson, the youngest member of a team placing and detonating dynamite for construction projects, that the local newspaper reports his death. Against all odds, however, he survives, minus one eye, one hand, several fingers, and half his penis. The frightful accident changes Oskar forever—or does it? Banished from his father’s house a year before the accident because of his interest in socialism, he moved in with like-minded colleague Magnus Nilsson and joined the Social Democratic Party. His visits in the hospital from Elly Lundgren, the young woman with whom he’s been keeping company, taper off and come to an end, and eventually he marries her sister, Elvira, with whom he maintains he’s found perfect harmony. The sexual urges he thought had finished return to him, and he fathers a son and two daughters. Years pass, marked by a highly characteristic parade of public events, private reflections, prose poetry, and prickly asides that will sound familiar to readers of Mankell’s memoir Quicksand (2017). Disenchanted by the failure of socialism to keep its promises to workers, a disillusionment that reflects the author’s own, Oskar leaves the SDP. His son expands his chain of laundries. His wife dies. He moves one last time, watches the summer come and go, shares some of his reminiscences with a faceless narrator but keeps others to himself, and suffers further reversals to his health before he finally dies in 1969, not long after turning 80. Although he’s known throughout his adult life as the man who survived a disfiguring accident, his own attitude is more stoic: “I don’t have much in the way of hands, but I can still pitch in.”

A quietly acerbic overview of 20th-century Sweden from the perspective of someone nobody expected to live to see it.

AFTER THE FIRE
by Henning Mankell
Nonfiction

AN EVENT IN AUTUMN
by Henning Mankell
Fiction

THE GIRL WHO LIVED TWICE
by David Lagercrantz
Fiction

FALL OF MAN IN WILMSLOW
by David Lagercrantz
Newsletter sign-up