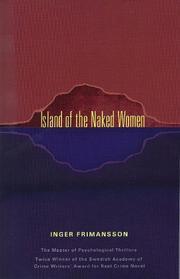 ISLAND OF THE NAKED WOMEN

On a remote Swedish island, simmering tensions lead to murder, and the aftermath is even worse.

While pitching hay in his barn, grim farmer Carl Sigvard falls and breaks his leg. The job of herding his cattle on nearby Shame Island falls to his new, much younger wife Sabina and his son Tobias. A struggling writer who’s just published his first novel, Tobias reluctantly leaves the city and his girlfriend Marit to help his father, with whom he has little in common. Negotiating a relationship with coarse Sabina is another challenge. Also on hand to annoy Tobias are both Sabina’s imposing, mentally challenged son, an aspiring Elvis impersonator, and sneering farm hand Hardy, who’s always lurking in the shadows and contemplating mischief. Ingelize, a childhood schoolmate who’s recently changed the “s” in her birth name to a “z,” unexpectedly shows up with a paperback copy of Tobias’s novel, requesting an autograph. In no time, she confesses a longstanding crush and proposes that the two of them cohabit, a plan that offers more solitude for Tobias’ writing and more time to help Ingelize with her pony rental business. The stress of so many abrasive personalities in close quarters leads to a violent murder. From that point on, the plot turns more psychological, and Frimansson (The Shadow in the Water, 2008, etc.) adds the suggestion that the victim may be alive after all.