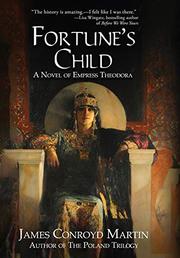 A historical novel set in sixth-century Constantinople charts the extraordinary ascent of a woman from poverty to royal power.

Theodora is born into inauspicious beginnings: Her Greek father, Acacius, is a bear trainer in a circus, and her Syrian mother, Asima, is a dancer. Their fortunes only grow worse when Acacius dies in an accident. Theodora is only 5 years old when the tragedy happens and is forced to work by the time she is 10. Her life is brutally hard—she is raped with impunity at 12—but she is also dauntlessly ambitious and refuses to resign herself to a lowly station. Theodora learns to read and write and works as a prostitute and an actress, but she pines to escape the “fringes of the theater circuit.” She eventually becomes the mistress of Justinian, the nephew of the emperor, destined to take the throne. Martin (Hologram, 2017, etc.) weaves into the tale a crucial subplot—a poor Syrian boy, born Sufian but renamed Stephen after he’s sold to an unscrupulous magus, discovers that he’s “singularly adept at languages” and lands a high-ranking position in Justinian’s court. He befriends Theodora, but she betrays him. Later, as empress, she demands that Stephen—wasting away in jail—become her biographer, giving him an opportunity for both freedom and revenge. In this ambitious novel, the author vividly brings to life the cinematic story of Theodora’s life, chronicling her rise, more halting than meteoric, to spectacular power (“Theodora set about to prove wrong her sister’s assertions regarding the roles of women. She wanted to affirm that her own role in life was not preordained—and that she had some talent, some gift”). Martin’s command of the historical period—not just the chief political events, but also the nuances of its cultural mores—is masterful. Furthermore, he conjoins that scholarly rigor with novelistic excitement—the entire tale is intelligently conveyed with great emotional poignancy.

A meticulously researched historical account presented in the form of a thrilling political drama.