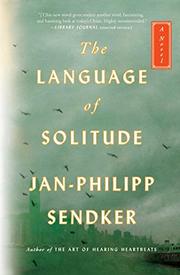 THE LANGUAGE OF SOLITUDE

Readers of the author's previous book will be glad to find the protagonist, Paul, leading a quiet life on the island of Lamma, a ferry ride from Hong Kong. He's still grieving for his dead child, but his relationship with travel agent Christine has deepened. After a reading from her astrologer, Christine fears she will bring harm to Paul. Paul visits the astrologer himself to assuage her concerns but is unsettled by the astrologer’s three-sentence prophecy (which is annoyingly withheld from readers for almost 200 pages). Then Christine receives a letter from her older brother, Da Long, whom she’d always assumed died during the Cultural Revolution, around the time she and her mother escaped the mainland to Hong Kong 40 years ago. He asks for help and wants to see her, so Paul accompanies her on what is supposed to be a 48-hour visit. They learn that Da Long’s wife has fallen mysteriously and incurably ill, and so have other neighbors in Da Long’s village as well as the local cats. When Christine returns to Hong Kong as scheduled, Paul stays behind, ostensibly to support Da Long during the visit from a Shanghai neurologist arranged by Da Long’s estranged but politically connected son, Xiao Hu. In fact, Paul begins investigating his suspicions that a factory may be poisoning the water in the nearby lake. He enlists help from Da Long’s daughter, Yin-Yin, a music student, and her journalist friend, Wang. But in his righteous anger, Paul ignores cultural differences as well as the cost to Chinese citizens who speak out against power. He also pays less attention than he should to what's happening in Christine’s life until circumstances force him to realize what matters most.

Sendker’s considerable knowledge of China is not enough to overcome too much philosophizing by self-consciously sensitive characters and a plot that holds few surprises.

THE ART OF HEARING HEARTBEATS
by Jan-Philipp Sendker

MUSIC OF THE GHOSTS
by Vaddey Ratner
Fiction

DO NOT SAY WE HAVE NOTHING
by Madeleine Thien
Fiction