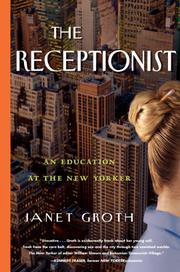 A nostalgic, wistful look at life inside one of America’s most storied magazines, and the personal and professional limbo of the woman who answered the phone.

Well before she became a teacher and biographer, Groth (English Emeritus/SUNY-Plattsburgh; Edmund Wilson: A Critic for Our Time, 1989, etc.) spent 21 years (1957–1978) behind the front desk at the New Yorker, taking messages, calming suspicious wives, babysitting and refusing John Berryman’s marriage proposals. The starry-eyed daughter of an alcoholic Iowa grocer, she arrived in Manhattan both educated and adorable, hoping for the byline that would buy her freedom. Instead, she had a series of disastrous romances and mostly became friends with the famous. Her steady lunch date was Joseph Mitchell, soon to become crippled by writer’s block; her thoughts on why he failed to deliver a great novel are intelligent and fascinating. Another friend was Muriel Spark, whom she recalls as both elegant and generous, if a questionable mother. Legendary editor William Shawn leaves her cold; she describes him as humorless and “sadomasochistic” toward writers. Despite her tendency toward clichés (“fame and fortune”; “it’s not who you are but who you know”), this bookish girl from flyover country who became a Mad Men–era hottie, and who found she had to leave this cozy nest in order to save herself, is very much an interesting character in her own right.

For readers who can’t get enough New Yorker lore, an amiable view from the inside.

HERE BUT NOT HERE
by Lillian Ross
Nonfiction