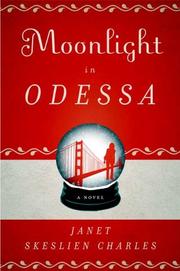 Ukrainian woman marries a much older American nearly sight unseen, but her husband and his drowsy corner of the United States are not what she expected.

Daria’s options in her native Odessa are grim. She’s a trained engineer, but the best job she can find is as secretary to a foreigner, Mr. Harmon, who blithely announces during her interview that her duties include sleeping with him. For months she staves him off with Penelope-like resourcefulness, but after a near-rape in the office she decides her only remaining defense is to play procurer, so she sets up Harmon with an old schoolmate. Calculating, money-hungry Olga first freezes out Daria, then tries to supplant her in the job. Meanwhile Daria is moonlighting at the matchmaking service Soviet Unions, acting as liaison/interpreter between male American lonely-hearts and women looking for a way out. Her beloved grandmother urges her to light out for America with an e-mail suitor, and with some trepidation Daria does so, choosing Tristan, a stolid Californian 20 years her elder, over Vlad, the charismatic local mobster who’s pursuing her. But “near San Francisco” means four hours away, and her jealous, controlling husband turns out to be a custodian rather than a schoolteacher. Charles paints a tender, bittersweet portrait of Ukraine and Odessa. Best of all, she doesn’t oversimplify difficult choices and hard decisions or resort to cardboard villains, although noncity dwellers figure here mainly as caricatures.