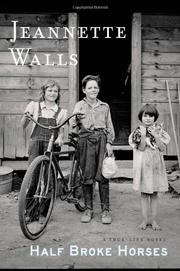 After a fascinating memoir about her vagabond parents (The Glass Castle, 2005), Walls turns her sights on her maternal grandmother Lily Casey Smith, who died when Walls was eight.

Because she uses a first-person narrative voice to capture Lily’s scrappy voice and imaginatively fills in some of the missing details of Lily’s life, Walls calls the work “A True-Life Novel,” but it follows the straightforward linear path of biography. Lily’s father, whose speech impediment belies his native intelligence, is an eccentric who once spent three years in prison for murder, idolizes Billy the Kid and believes child’s play is a waste of time. Lily’s childhood on ranches in west Texas and New Mexico is an idyll filled with chores like breaking horses. She wins academic honors at the Catholic boarding school she attends until her father spends her tuition money to buy some dogs. A scrapper, Lily overcomes every setback. Although she has no high-school degree, during World War I’s teacher shortage she temporarily lands the teaching jobs she loves. When the jobs evaporate, she moves to Chicago, where she marries a salesman who turns out to be a thieving bigamist, “a crumb bum” as Lily calls him. At 27, she starts college in Arizona where she meets and marries Jim Smith, whose no-nonsense smarts match Lily’s. When money gets scarce, Lily, now a teacher and mother of two, supplements the family income by selling bootleg liquor. Jim lands a job managing a 100,000-acre cattle ranch and builds a dam that allows the ranch to survive a terrible drought. When the ranch is sold, the Smiths move to Phoenix, where they live in unaccustomed comfort. But city life does not suit them and they head back to rural Arizona. Lily’s relationship with her equally headstrong but less practical daughter Rosemary—who grows up to be Wall’s mother—becomes increasingly prickly. To the end Lily is one tough bird.

Like her grandmother, Walls knows how to tell a story with love and grit.


10 CHARACTERS WHO WILL BE YOUR BFF FROM PAGE ONE:

THE MYSTERY OF MERCY CLOSE
by Marian Keyes
Fiction

I'VE GOT YOUR NUMBER
by Sophie Kinsella
Fiction

THAT'S JUST HOW IT WAS
by Mary Thorpe
Indie

YOU FALL OFF, YOU GET BACK ON
by Mary Stobie
Newsletter sign-up