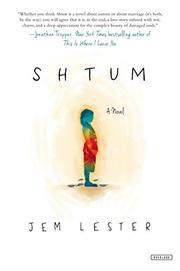 An issue-centered novel from former British journalist Lester showcases severe autism from the point of view of a devoted, deeply flawed father.

Ten-year-old Jonah cannot speak, is not toilet-trained, and has emotionally exhausted his parents: lawyer Emma, the primary breadwinner, and Ben, who supposedly manages his father’s Georg’s catering equipment business, although he spends much of his workday at the pub. In desperation, Emma and Ben apply to place Jonah in a residential school offering the care he needs. When the local school district, required to cover the extremely high tuition, cites Jonah’s “loving family” as a reason to reject his enrollment at the school (although American readers may be amazed at how much help the British government does offer), Emma suggests that she and Ben pretend to separate before appealing the ruling. Ben reluctantly agrees. He and Jonah move in with Georg, while Emma remains behind in their home. Though she has carefully organized a plan for Ben to follow in order to get Jonah transferred to the residential school, she becomes increasingly unavailable to talk to Ben or see Jonah and even advises Ben to borrow the money for legal costs from his father since she has tied up their funds in an investment. Ben and Georg, a gruff refugee from Hungary, have a difficult relationship. Ben’s mother left when he was 12, and Ben resents that his emotionally withholding father openly adores Jonah and tells him stories about his Jewish childhood in Hungary that he’s never shared with Ben himself. Then Georg is diagnosed with cancer. As Ben cares for both Jonah and Georg while carrying out Emma’s school-appeal blueprint, he must finally face the two long-avoided issues that have concerned his friends and Lester’s readers all along: Ben’s dependence on booze and his misreading of so much about his relationships with Emma and Georg.

Lester’s tendency toward preachy platitudes—“without loving myself, I cannot hope to love another”—undercuts the power of his heart-wrenching characters and plot.

IT'S. NICE. OUTSIDE.
by Jim Kokoris
Nonfiction

LOOK ME IN THE EYE
by John Elder Robison
Fiction