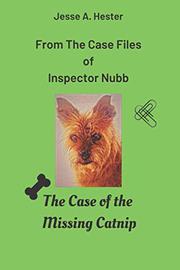 FROM THE CASE FILES OF INSPECTOR NUBB

The Case of the Missing Catnip
by Jesse A. Hester
BUY NOW FROM
AMAZON
BARNES & NOBLE
LOCAL BOOKSELLER
GET WEEKLY BOOK RECOMMENDATIONS:

A cozy mystery that’s set in the town of Liberality Hill, in which dogs and cats live in relative harmony—and the chief police inspector is a small Norwich terrier.

Inspector Nubbs—so named because his tail was cropped when he was a puppy—is enjoying a relaxing morning in the park when he receives a call from Deputy Officer Jerry Lee “J.L.” Dempsey, informing him that there’s been a robbery at Sassy’s Boutique. He finishes his dog biscuit, hops on his motorbike, and heads over to contend with the store’s aggravated proprietor, Sassy Marie, a “gray-haired Maine Coon cat, with black stripes extending down both sides of her face.” J.L., a well-meaning but accident-prone chow/rough collie mix, and Officer Shadow, a black Labrador retriever/German shepherd mix, are processing the crime scene. Before long, Nubbs deduces that only one item of importance is missing: a large supply of catnip, which is a controlled substance. Sassy can legally purchase only eight grams per month to make her popular feline perfumes and colognes, but she confesses to recently buying 30 on the black market. The investigation leads Nubbs and his team to Samson LeRoy, a tough feline and former welterweight boxer, and his Doberman sidekick, Sully. Hester (The Obituary Murder, 2019, etc.) takes a break from his human-populated Jonas Lauer mystery series to indulge in a humorous, Disney-esque bit of fancy. The character-driven caper is somewhat light on mystery, although readers will still receive some surprises along the way. Nubbs, the tale’s narrator, is a clever and delightful lead who lives with his adopted mother—Bossy Mae Waddles, an aging feline who rescued him when he was an abandoned pup. The animals may talk, drive cars, and conduct business like human beings, but they also display enough species-specific attributes to make readers smile. For example, when nervous, the felines purr frantically, and canines swish their tails. Overall, Hester’s tale is a generally amusing distraction, and one dangling plot thread leaves open possibilities for a sequel.

A whimsical, offbeat ride through a quirky fictional universe that provides some genuine chuckles.

MORE BY JESSE A. HESTER

THE OBITUARY MURDER
by Jesse A. Hester
Indie

THE STAR SPANGLED MURDER
by Jesse A. Hester
Indie

THE HOUSE OF CARDS MURDER
by Jesse A. Hester
Indie

THE WHISKEY BARREL MURDER
by Jesse A. Hester
Indie

THE BOTTOMS UP MURDER
by Jesse A. Hester
Newsletter sign-up