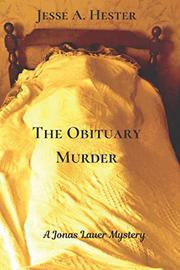 An arsonist, a probable illegal gambling ring, and a suspected serial killer compete for a Tennessee sheriff’s attention.

Hester’s (The House of Cards Murder, 2014, etc.) sixth installment of a mystery series finds lawman Jonas Lauer pulled in different directions professionally and personally. A firebug has been torching buildings in the area, and Jonas sees an escalation in the arsonist’s activity. The sheriff also thinks an abandoned factory with “a smorgasbord of shoe impressions” on its dusty floor, freshly emptied beer bottles, and a telltale poker chip points to an illegal gambling ring. But this worrisome case begins when Jonas’ mother smells something putrid coming from an elderly neighbor’s house. The stench turns out to be the neighbor himself, who’s in an advanced state of decay. The widower’s bloated body reclines in the center of his bed. After surveying the scene, Jonas does “not believe for one instant that Olen Peterson died from natural causes.” Jonas finds hidden in the dead man’s desk obituaries of elderly people whose apparent deaths by “natural causes” went unnoticed for quite some time. Patterns in the deaths indicate a serial killer may be targeting the elderly, particularly ones cut off from society. Jonas fears his own parents may be targeted. The sheriff’s other concerns stretch into the afterlife, as he is haunted by the ghost of a criminal who died in his arms, and into his domestic life, as he helps his fiancee, Lydia Corbett, finalize wedding plans. In this series entry, language can sound unnatural, as when Jonas admits to “allowing the pinwheels of my mind, to oscillate in silence for a few seconds.” Often, descriptions of characters are too similar—for example, six have “square faces.” Although getting into Jonas’ head adds richness to the character, the tale suffers from too much reminiscing and recapping. A lighter subplot, a series feature up to now, is absent from this volume, which laments the opioid epidemic, youth-obsessed culture, and the annihilation “of the local trade” by big-box stores. Still, Jonas shines as a likable, thoughtful character—“one of the good ones” according to Lydia—in this folksy and engaging series with a distinct Southern feel.

A solid mystery that would benefit from a little less talk and a lot more action.

MORE BY JESSE A. HESTER

FROM THE CASE FILES OF INSPECTOR NUBB
by Jesse A. Hester
Indie

THE STAR SPANGLED MURDER
by Jesse A. Hester
Indie

THE HOUSE OF CARDS MURDER
by Jesse A. Hester
Indie

THE WHISKEY BARREL MURDER
by Jesse A. Hester
Indie

THE BOTTOMS UP MURDER
by Jesse A. Hester
Newsletter sign-up