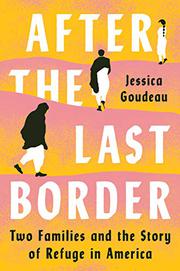 AFTER THE LAST BORDER

An Austin-based journalist and immigrant activist interweaves narratives of two refugees with a history of modern American refugee resettlement policies.

World War II transformed the United States into a global leader in refugee resettlement. However, as former Catapult columnist Goudeau shows in her moving debut, the American dream has since become out of reach—both within and without U.S. borders—to immigrant asylum-seekers. Drawing on extensive interviews with two refugees she helped to resettle as well as historical research, the author draws attention to a resettlement problem that has reached crisis proportions. She centers the narrative on two women: Mu Naw, a member of a persecuted minority in Myanmar, and Hasna, a refugee from the Syrian civil war. Both were granted a chance to resettle in the U.S. in the first and second decades, respectively, of the 21st century, a time when the number of refugees globally had reached all-time highs but the number of refugees offered resettlement in the U.S. had reached historic lows. Yet because Mu Naw was Christian and Hasna was Muslim, the two had distinctly different experiences. Mu Naw faced the inevitable discrimination that came with immigrant status. Nevertheless, many white Americans offered the social and financial support that allowed her and her family to leave poverty behind and become middle class within the span of a decade. Hasna, who arrived in the U.S. just a few months before the election of Donald Trump in 2016, found herself facing a far more hostile atmosphere and uncertain future. Most of the people who helped her and her family were Syrian American. When American travel bans against Muslims, including Syrian refugees, went into effect in 2017, her hopes of reuniting the members of her war-fractured family faded. In a detailed text that moves smoothly around in time, Goudeau effectively humanizes the worldwide refugee crisis while calling much-needed attention to a badly broken American immigration system.