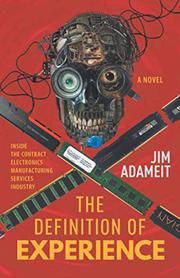 THE DEFINITION OF EXPERIENCE

A project manager turns a surprise layoff into an opportunity for payback in this debut novel.

Adameit’s narrative centers on Dan Gamble, a project manager with Stygian, an electronics product manufacturing firm. Gamble, who has been in the industry for three decades, is respected and well liked by his peers and business partners, but isn’t thrilled with his employer’s practices and demeanor. Still, he’s been with Stygian for almost five years, at which point the employee stock ownership program fully vests, so Gamble hangs in there. Then he’s unceremoniously let go three months short of vesting. Despite the shock, Gamble agrees to help tie up some loose ends, and in the process, discovers something he shouldn’t. Angry over his treatment, he has an idea on how to extract justice from Stygian, and discovers he has more friends and allies than he thought willing to help him get it. Adameit, who also has three decades of EPM experience, writes about the ins and outs of the industry with knowledge and flair, making what might be otherwise dry information come to life. Unfortunately, this verve doesn’t always extend to the dialogue, which sometimes veers between excessively explanatory and downright florid. Despite the inconsistent dialogue, the author does fine work in sketching in the characters. Each one is distinct on the page, with consistent traits and reactions. And despite the antagonists’ almost cartoonishly callous greed, nearly all of the players evince at least one somewhat redeeming value or trait. One of the major subplots, involving Gamble and his cohorts committing an extremely shady act in order to gain leverage on the primary antagonist, demonstrates the characters also display a few negative qualities. This subplot is just one of many—so many that the number of threads and machinations bogs down the book and dilutes its impact.

Despite an overabundance of storylines, this engrossing tale delivers deep industry knowledge and rounded characters.