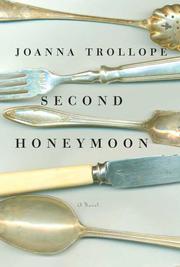 British author Trollope’s tale of confronting life post-motherhood is a masterpiece of the mundane.

When Edie met Russell, she was 22, a struggling actress with slapdash ways and a big heart. Three grown children and the best years of her life later, Edie is still slapdash and sweet, still acting and still happily married to Russell. But the departure of her youngest child, Ben, hits her unaccountably hard. Russell welcomes the chance to renew his love affair with his wife, but Edie smashes his hopes, treating him coldly and dismissively. The husband, she seems to be saying, was only a stage. Now that the children are gone, her sense of purpose is, too. Another author would have used this opportunity to introduce infidelities, divorce, suicide attempts—the whole disaster kit of contemporary fiction. But Trollope (Marrying the Mistress, 2000 etc.) is not writing about characters, she is writing about people. Russell spends a bit more time at work; his most extreme reaction to his wife’s unpleasantness is a wry smile. Edie gets a part in an Ibsen play, and despite much whining that she doesn’t even care, at last becomes joyfully obsessed with her acting again. When the grown children begin to return home, still needing their parents after all, Edie is initially elated. Now that she has started her new life, though, she soon wants them—and their laundry—out of the way. Trollope spends time with each of the children, and even some of their friends and lovers, creating a large and complex canvas of everyday events. Her people worry about their jobs, quarrel with their siblings, can’t afford the apartments where their partners want to live. It’s a world where people get on with life, act crabby for a while, but in the end cheer up.

THE OTHER FAMILY
by Joanna Trollope
Fiction