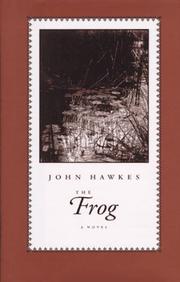  The tale of a French who boy gets a frog in his stomach before WW I, then carries it there through a lifetime that may or may not be allegorical but that the reader isn't entirely unhappy to have end. Pascal GÉteau has a happy childhood on a French estate where his mother is cook to a young count and countess, his father chief farmer. The sensitive but oddly-shaped boy--he's short, thick, squat--grows enamored of a frog-pond, waiting long hours to see a favorite amphibian appear on a particular lily pad. When the frog one day fails to show, Pascal charges into the stagnant pond--and comes out with the creature, somehow, in his stomach. And thereby hangs--well, at least a string of apparently significant events. Pascal's stomach cramps result in the delightful experience of being administered an enema by his young, pretty, adorable mother, though his father becomes increasingly jealous of the attentions paid by mother to son. For all, to be sure, is not pleasure. Something causes the boy to become a waking somnambulist, and after he offends the young countess by appearing in her boudoir (WW I comes and goes at about this time, taking with it a leg of Pascal's father), he is sent off to the Saint-Mamäs asylum, declared mad for believing a frog to be in his stomach. The reader will see ``proofs'' that the frog is really there, and will follow Pascal's adventures as lover of the asylum directors remarkable wife, then as switchboard operator (and afterward much more) in a brothel--until an incident with a foreigner, a prostitute, Pascal, and Pascal's frog (named Armand, by the way) results in a return to the asylum, a last discovery, and tale's end. A ``history'' of French culture--maybe; if it's likely to be most appealing to those with a taste for the luxuriantly decadent, it's served, in any case, under Hawkes's (Sweet William, 1993, etc.) usual flawless, rich, smooth sauce of words.