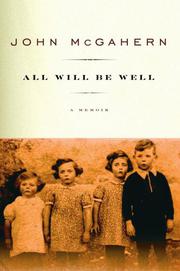 ALL WILL BE WELL

A gloomy memoir of growing up amid harsh conditions in rural Ireland.

Born in 1934, novelist McGahern (By the Lake, 2002, etc.) traces his childhood in and around Leitrim, a central lake town at the base of the Iron Mountains where the soil is extremely poor and life rather grim and joyless. Early on, he and his three sisters (more siblings arrived later) lived with their paternal grandmother and mother in Ballinamore, while their father, a former IRA member now serving as a sergeant in the army, was stationed at the barracks 20 miles away in Cootehall. Young Sean, as the boy was known, clung to his gentle mother, Sue, a schoolteacher. Although she never beat her children, she couldn’t protect them from the occasional explosive brutality of their willful, handsome father or the routine canings received at the hands of schoolmistresses. At the base of the violence tolerated by this deeply Catholic society, asserts McGahern, “was sexual sickness and frustration”: Sex was deemed unclean, and the division between body and soul firmly demarcated. After their mother died of cancer, ten-year-old Sean and his siblings lived at the whim of their coldly calculating father. The children drew together for survival, scrambling to educate themselves and then get away from home. Sean was accepted at a teachers’ training college in Dublin closely associated with the Church, which assured him of a good job at a time when many Irish people were forced to find employment in Britain or abroad. His father gradually declined in mental and physical health just as Sean’s literary star was rising; his first novel, The Barracks, won the AE Memorial Award in 1963. After he married, the author moved back to Leitrim, mostly as a gesture toward the memory of his beloved mother.