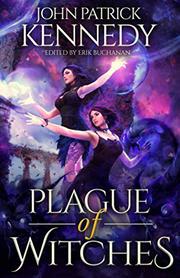 Having just learned she’s a witch, a 20-something joins an exclusive university to learn what happened to her mother, who disappeared years ago, in this fantasy mystery.

Californian Kana Klausen’s 21st birthday comes with a visit from a strange woman. Professor Claire White tells Kana that she is a witch, like her mother, Akemi Wakahisa. Before vanishing two decades prior, Akemi put a spell on her infant daughter that suppressed her magic until she turned 21. Kana can help uncover what happened to Akemi by attending Shipton University—a university for witches in Connecticut. Though Shipton is well known, witches have implemented two agencies to keep spellcasting a secret from the public. Kana takes a crash course in supernatural arts and, at Shipton, quickly picks up her mother’s incomplete, initially undisclosed research in hopes of learning Akemi’s fate. This entails an experiment involving other students, including Vanessa Lake. Despite Vanessa’s recurrent troublemaking, the National Council of Witches sends her to Shipton on a probationary basis; she wears a bracelet allowing the administration to monitor whatever magic she uses. Around the same time, a massless entity awakens and escapes a cage made of pure energy. This entity feeds on the pain of animals and humans but needs “the Promised”—a body that can sustain the entity’s presence. This is a specific individual, but it doesn’t know that person’s identity. However, it slowly regains power and memories via multiple murders, gradually making its way to Shipton, where the Promised is most assuredly Kana or someone close to her.

Although this spirited tale begins as primarily a fantasy, it ultimately spins into a taut, surprising mystery. Kennedy (Lady Dread, 2019, etc.), for starters, gradually introduces distinctive characters. These include fellow student Night, who’s both Vanessa’s assigned tutor and Kana’s romantic interest; Vanessa’s roomie, Cassandra; and townie, Ian, who initiates a mostly physical relationship with Vanessa. As the story progresses, readers will anticipate some reveals, like the goal of Akemi’s research or which particular witch is possibly assisting the entity. But others are bombshells, especially during the blistering, twisty final act. Vanessa is a standout among a cast of robust, predominantly female characters. She’s led a hard life in Canada courtesy of her indifferent guardian, Ambrose Levesque. But while she’s rude at first (even to undeserving Night), her attitude eventually lessens in severity—though she remains strong, just as likely to punch someone in the face as use her more unusual powers. Kennedy writes clearly and concisely without lingering on more lurid moments, like sex scenes or bloody deaths. Nevertheless, the author’s best feat here is the description of the mysterious entity—whether it’s in an incorporeal form or occupying one of many bodies. In one scene, the entity flits between three individuals in a matter of seconds, part of a plan that further solidifies it as an unnerving, formidable villain. A sensational ending sets the stage for a sequel that impatient readers will crave.

I Am Titanium
by John Patrick Kennedy
Indie