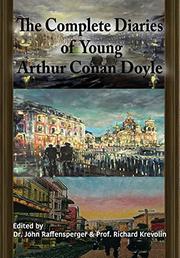 Ever wonder where Arthur Conan Doyle got his Sherlock Holmes ideas? From his thrill-packed diaries, according to these takeoffs on the iconic detective series.

Mixing facts about Conan Doyle’s life with fictional sleuthing, these mock journal entries span 1878 to 1883. The author, a medical student in Edinburgh, supposedly played Watson to the real-life Dr. Joseph Bell, a Holmes-ian professor complete with deerstalker cap, meerschaum pipe, and insufferable omniscience. This volume contains three novels on the duo’s exploits, each featuring quotidian murders linked to grand political conspiracies, cameos by historical figures, and encounters with real-life writers. The first yarn, Adventures in the Wild West, takes the bumbling Conan Doyle and imperious Bell to Chicago, where men are dropping dead and having their glands harvested. Conan Doyle’s shipboard meeting with Robert Louis Stevenson telegraphs the rambunctiousness of the tale, which includes a balloon ride to save President Rutherford B. Hayes and a hook-handed villain. Installment two, Adventures in Russia, sends the heroes to St. Petersburg to save the czar from several assassination plots involving torpedoes and nitroglycerin-filled eggs. The story introduces Penelope Walshingham, a British agent of dubious loyalties. An appearance by Dostoyevsky signals a darkish narrative polarized between brutal czarist police and murderous anarchists, with Bell bingeing on cocaine and Conan Doyle bedding a kitchen maid. Novel three, Adventures in America, ambles toward California when the murder of one Siamese twin (necessitating emergency separation surgery) alerts the protagonists to a grab for the Yukon’s molybdenum resources. Cameos by Mark Twain and Oscar Wilde highlight a droll frontier picaresque with turns by Butch Cassidy and the Sundance Kid and a poker showdown.

The team of medical historian Raffensperger and writing professor Krevolin (The Mystery of the Scarlet Homes of Sherlock, 2016) tweaks the Holmes tales to focus on forensics, with intriguing demonstrations of period surgical breakthroughs along with much procedural. (“Bell cut around the tumor until the gyri and sulci of the temporal lobe of the brain came into view.”) They adroitly pilfer tropes from their classic sources, reveling in Victorian trash talk—“You dare to lay hands on a nobleman!”—and contrivances: Mystery men are reliably killed before they can spill their information, and in one bad spot the heroes rely on crazed monkeys for rescue. The authors rack up the body count with awesome efficiency, but some of the mayhem, like an organ extraction from a conscious, paralyzed patient, conveys a chilling horror. Fans should find Bell a worthy epitome of Holmes, his deductions a higher form of know-it-all-ism—“Graceland Cemetery is well known for its fine stand of Hazelnut trees and there is a Hazelnut leaf stuck to the underside of your muddy left shoe”—and his right to rule serenely unchallengeable. Conan Doyle, a sad sack who misses the clues and loses the girls, bears Bell’s insults—“Laddie, sometimes I wonder if you have the cerebral facility for a future in the medical arts”—with quiet indignity but makes for an engaging observer of the hoopla. While it’s all a bit formulaic, the authors stage the proceedings with aplomb, regaling readers with energetic storytelling and colorful characters.

An entertaining, rollicking addition to the Holmes-verse, combining real-world lore with over-the-top melodrama.

SOME PLACE BETTER THAN HERE
by Landen Wakil
Indie

THE WANDERER AND THE NEW WEST
by Adam Bender
Indie

IN MY MIND'S EYE
by Jan Morris
Mystery