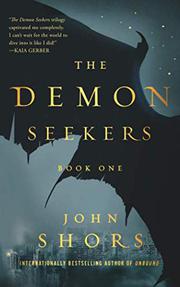 Survivors on a post-apocalyptic Earth engage in a never-ending war with space aliens in the start of Shors’ (Unbound, 2017, etc.) SF trilogy.

By 2171, humans have been fighting aliens, known as “demons,” for a century. When they first arrived, they killed billions of people, and the only survivors were those who were underground at the time. The aliens made Earth into a prison for alien criminals; the inmates ultimately escaped their confinement and began attacking humans. Inexplicably, the demons also left 11 Orbs of Light scattered around the world and 33 silver staffs. Humans are able to teleport, or “drop,” from Orb to Orb, and the staffs are astonishingly potent weapons against the winged, fanged, and clawed demons. Seventeen-year-old Tasia is a Seeker whose life’s purpose is to kill aliens. She’s skilled with a rifle, but only higher-ranking Guardians are allowed to wield staffs. She blames herself for losing members of her family and other loved ones to demons as well as for her younger brother’s illness from an infection, which happened while he was under her care. To secure necessary medicine for her brother, she journeys to the Arctic Stronghold (one of 11 such structures, each located near an Orb). Drops, however, are unpredictable, and getting from New York City to the Arctic and back could take numerous trips. Her traveling companions include another Seeker named Aki and Draven, a Guardian who writes off Tasia as a coward. Tasia later falls for kindhearted Jerico, a Carrier who collects and transports supplies. Their journey is harrowing thanks to the demons’ swooping assaults.

Shors offers a rousing, sharply written series starter. The demons’ attacks are brutal throughout, and it’s difficult for humans to fight against them; in order to kill demons, Seekers must accurately shoot them in the eyes. The Orb drops allow the author to showcase various parts of the future world while maintaining the urgency of Tasia’s search for medicine. Each new destination is a surprise, from the deserts of Risen (formerly the Australian Outback) to the rainforests of Tasia’s home, Angkor (formerly Cambodia). The trips give readers unnerving views of the devastated Earth; even some Strongholds are in ruins or no longer functional. The strongest scenes entail Tasia’s drop experiences; the teleportation disorients her more than other people, and she carries a laminated note as a post-drop reminder of demons’ existence—words of warning that don’t always register immediately. Tasia is a splendid protagonist who makes mistakes and constantly doubts herself but deeply cares for others and, contrary to Draven’s belief, is truly courageous. Other distinctive characters include Aki, who brandishes a samurai sword, and Jerico, whose romance with Tasia is nicely understated. The scenes from a demon’s perspective are surprisingly effective, as when it states a preference for “the flavor of human meat.” Some moments introduce elements of mystery; the demons, for unknown reasons, want the staffs, and Tasia begins hearing a strange voice in her head.

An exhilarating tale with an engaging protagonist that will have readers eagerly anticipating sequels.