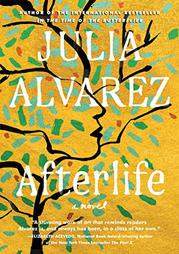 One of the best chroniclers of sisterhood returns with a funny, moving novel of loss and love.

This is the first novel in 15 years from Alvarez (How the García Girls Lost Their Accents, 1991, etc.), and she builds on one of her strengths, depicting the complex relationships among sisters. Her main character is Antonia Vega, who, as the story begins, is stunned with grief. A year before, she and her husband, Sam, were driving separately to a restaurant dinner near their Vermont home to celebrate her retirement when he suffered a fatal aneurysm. Bereft of a beloved spouse and done with a rewarding career as a college professor and novelist, she’s adrift and “has withdrawn from every narrative, including the ones she makes up for sale.” Then need comes knocking in the form of an undocumented Mexican worker at her neighbor’s dairy farm. Antonia emigrated long ago from the Dominican Republic, and young Mario seeks her help (and translation skills) in reuniting with his fiancee, Estela, who is also undocumented and stranded in Colorado. Antonia is hesitant. Sam, a doctor who was widely beloved for his volunteer work and empathy, would have done all he could, she knows: “He was the bold one. She, the reluctant activist….” In the meantime, Antonia sets off to celebrate her 66th birthday with her three sisters. The two younger ones, Tilly and Mona, are as contentious and loving as ever, Tilly a font of oddly apropos malapropisms such as “That bitch was like a wolf in cheap clothing!” But all of them are worried about their oldest sister, Izzy, a retired therapist who recently has been behaving erratically. When her phone goes dead and she fails to arrive for the party, the other sisters swing into action. Izzy’s fate will take surprising turns, as will the relationship between Mario and Estela, as Antonia tries to figure out what she can do for all of them and for herself. Alvarez writes with knowing warmth about how well sisters know how to push on each other’s bruises and how powerfully they can lift each other up.

In this bighearted novel, family bonds heal a woman's grief.

A WEDDING IN HAITI
by Julia Alvarez
Nonfiction

ONCE UPON A QUINCEAÑERA
by Julia Alvarez
Fiction

IN THE NAME OF SALOME
by Julia Alvarez
Nonfiction

SOMETHING TO DECLARE
by Julia Alvarez
Fiction