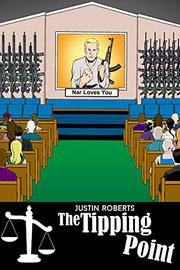 In Roberts’ dystopian novel, a diplomat in a North America of the far future explores a pariah continent, where descendants of the defunct U.S. concentrate their stern religious faith around firearms and death.

Debut author Roberts’ SF volley against America’s obsession with guns and the Second Amendment happens in the 2600s. Ex–North America is a “backwater where no one goes,” little remembered and unmourned. What’s left are scattered communities with electricity, industry, running water, crops, and trade but no national cohesion or ties to the outside world. The rest of the planet has advanced to a cosmopolitan civilization from which diplomat Ishwar Dhoni, punished for a personal indiscretion, is exiled. He is reassigned to an American coastal fortress maintained by “Earth Administration” in a long-standing quarantine. The narrative—split between Ishwar’s debriefings and the rustic inhabitants of a certain Paradise Valley—informs readers that toxic U.S. gun mania ran riot in the 21st century, with weapons lobbyists and ultraconservatives subverting Congress, stifling the media, and arming militias. School shootings became routine, and armed gangs, flaunting their firepower, raided and robbed until even the U.S. government (relocated to Salt Lake City) fell. Once special commandos of the unified Earth extinguished America’s nuclear arsenal in surgical raids, the rest of humanity shunned the continent. Now its villages worship “Nar,” an Aryan-blond messiah said to have brought guns directly from God in heaven, and random schoolchildren are massacred in a “Shady Hook” festival. Ishwar and a history-minded cohort/lover investigate, among other things, a cult’s murky origins in the family of the last U.S. president, who was named...Heston. That’s one of the few outwardly humorous touches in an otherwise sober narrative that treats the outrageous premise in deadpan The Handmaid’s Tale manner (though Roberts is cheeky enough to include himself as one of the few future academics to comment on the gun-pocalypse). Some juicy targets hit: right-wing populist paranoia and manipulation of history for power’s sake. But repeatedly falling back on a simplistic guns-are-bad theme minus deeper insights into American pathologies makes for a light-caliber attack, much as gun fanaticism well deserves a pistol-whipping.

GUNS DOWN
by Igor Volsky
Indie