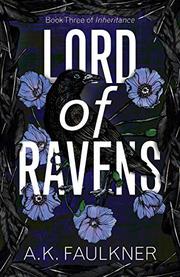 Two lovers discover new paranormal gifts and enemies in this third installment of a series.

Things seem to be looking up for Laurence Riley in San Diego, California. The god Herne the Hunter appears before him and tells him that, along with other abilities like precognition, Laurence is capable of magic. Actually learning magic will necessitate seeking out a man named Rufus Grant, whom Laurence first saw in a vision. Meanwhile, Laurence’s romantic relationship with British Earl Quentin d’Arcy has become decidedly more fervent. Unfortunately, the earl has an unwelcome encounter with his own father, the Duke of Oxford, who Quentin is convinced killed his mother. The duke demands his son return home, and Quentin, who has essentially been hiding out in the United States, suspects his father tracked him down via magic. Sadly, the duke’s presence casts a dark cloud over the lives of both lovers. Laurence subsequently has a glimpse of the past involving 5-year-old Quentin suffering his father’s abuse. The vision is so horrifying it nearly sends Laurence back to his heroin habit. Soon, Black Annis, a “blue-tinged” creature, threatens the youngsters with special abilities whom Quentin has befriended and cares for. Alarmingly, the creature vows to eat the children. In order to defeat Black Annis, Laurence will have to acquire a weapon from the Otherworld, a place outside of the mortal realm. But as he can only use the weapon for a specific purpose, Laurence must resist the temptation to slay both the blue-tinged creature and Quentin’s depraved father with it.

Faulkner (Knight of Flames, 2019, etc.) excels at creating individual stories within a cohesive urban fantasy series arc. For example, this book spotlights Quentin’s frayed connection to his father. But earlier installments had teased this with Quentin’s outburst at his mother’s funeral (which Laurence also sees in a vision in this story) and the earl’s scars, courtesy of the duke. As in the preceding novel, the couple’s relationship and shared intimacy show progress, having begun with virginal Quentin’s hesitancy. This time their scenes are unmitigated erotica, as they’re much more explicit than before. The author beefs up the pages with characters from folklore (including Black Annis) while Laurence’s trek through the Otherworld features a few recognizable faces (and objects) from Arthurian legend. Despite the story’s overall grimness, there are occasional lighter touches, like periodic appearances of the couple’s loyal dogs, Pepper and Grace. Similarly, Herne’s gift to Laurence is a raven egg. The resultant “bald little pink baby” raven, named Windsor, is like a child, as Laurence regularly feeds him and sometimes needs others to birdsit. Eventually, the raven, Laurence’s familiar, will be able to relay messages to the god. Readers anticipating the author’s knack for indelible prose won’t be disappointed: Laurence “lowered his hand to the pendant as he spoke the final word, and the universe became a vacuum….His life flashed from heart to fingertips, and he saw whorls of green flow from his fingers and into the pentagram.”

A grand entry in a consistently gripping and remarkable urban fantasy saga.