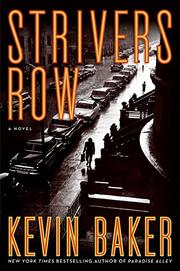 World War II Harlem is the setting for the parallel stories of a preacher (invented) and a hustler (the future Malcolm X) in Baker’s fourth novel, which concludes his New York–based trilogy.

A Harlem minister, Jonah Dove, is returning by train to New York from Martha’s Vineyard with his wife Amanda. Jonah, light enough to pass for white, and his much darker wife are saved from a mob of racist soldiers by an intrepid railroad sandwich man, 18-year-old Malcolm Little, leaving Jonah feeling impotent and humiliated. His famous father Milton (now 94) once led former slaves out of Virginia to form his first congregation. On retirement, he installed Jonah as his successor and even arranged his marriage; no surprise, then, that Jonah feels unworthy of his congregation and the too-perfect Amanda. Meanwhile, Malcolm, new to Harlem, is like a kid at Christmas, checking out the Savoy, Small’s Paradise and an anything-goes rent party. He falls in love with a beautiful white girl at the Savoy; he works as a waiter, a numbers runner, a drug dealer and a john-walker; he even has visions of Elijah Muhammad, though this reckless young blood has yet to touch bottom. Baker alternates between his two leads (goodbye, narrative momentum) while dipping frequently into their pasts. Scenes from Malcolm’s grim Michigan childhood are interwoven with striking vignettes of Elijah and Wallace Fard, his bizarre mentor; Jonah’s darkest hour occurred after rejection by his college buddies (they discovered he was colored). Affecting both men is a Harlem seething with anger at its army of occupation (the white cops) while black soldiers are being brutalized down South. Baker ends with an unlikely transformation. Wimpy Jonah, who has even botched his brief the-hell-with-it-all departure from home and church, returns to deliver a triumphant sermon, rescue Malcolm from a cop and defuse a race riot.

Baker the social historian (he’s pretty good) trumps the novelist (not so hot) in this overstuffed novel whose parts are better than the whole.

SOMETIMES YOU SEE IT COMING
by Kevin Baker

THE WEIGHT OF A PEARL
by Walker Smith
Newsletter sign-up