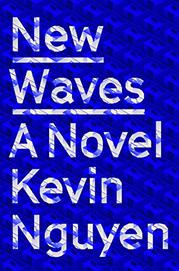 Startup culture and science fiction collide in this debut novel about love, loss, and coming-of-age.

Lucas and Margo are best friends, or something like it. The two cynical 20-somethings brave the oppressive whiteness of startup culture together, downing beers at the bar around the corner from their office and commiserating about their clueless, immoral bosses. "Being black means you're merely a body—a fragile body," confesses Margo, a talented engineer with a penchant for SF, over drinks. "If there was a machine that could do it, I'd change places with you right now, Lucas….I would be an Asian man and I would move through the world unnoticed and nobody would bother me." In retaliation for being pushed out of their company, Margo decides to steal user data and convinces cautious Lucas to help. But when she is suddenly struck and killed by a car, Lucas is left to navigate their theft—and the emotional roller coaster of working in big tech as a minority—on his own. Nguyen, a former digital deputy editor for GQ and a veteran of Google and Amazon, has a keen eye for satire. He illuminates how "lean" startup companies led by young white men with little management experience manufacture crises only to dodge responsibilities to their users and staff. "I started Phantom with lofty principles, and I haven't given up on them," says one CEO without irony. "But we'll never achieve those ideals...if we run out of money first." Running alongside the dystopian horrors of Nguyen's workplace satire are the warmth and humor, sadness and vulnerability of Lucas' and Margo's voices. Using text messages, voicemails, message board posts, and short story snippets, Nguyen's novel spirals inward to capture the hang-ups, cultural obsessions, and fuzzy ambitions of his characters. "I'd hoped leaving behind all my material possessions would mean leaving behind all the things I'd become: a cruel friend, a workplace creep, an alcoholic," Lucas muses from his new, nomadic life in Tokyo. "Or maybe I was all those things to begin with." At last confronted with his own poor romantic and workplace behavior, Lucas must decide how he will honor his friend's memory and whether he will work to become a better person in the hazy promise—or possible tragedy—of the future.

A blistering sendup of startup culture and a sprawling, ambitious, tender debut.