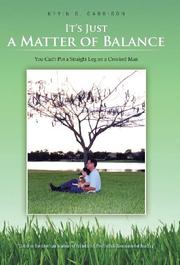 It's Just a Matter of Balance

A heartwarming debut memoir about finding meaning in the face of loss.

In Garrison’s debut memoir, he recounts his experience with amputation and how it led him to devote his life to the study and production of prostheses. At 17, he was diagnosed with an aggressive form of cancer in his right foot, and his doctors told him there was a “ninety-five percent chance” that amputation would be necessary—a pivotal moment in Garrison’s life that he recreates with vivid feeling (“The effect of those words as I tipped my head back, looking directly at the blinding bright lights above, shocked me in a way that I had never experienced before”). Three months after this fateful appointment, surgeons removed his foot and ankle. To any teenager, losing a limb might seem like the end of the world, and particularly to the athletic young Garrison, who admits that before losing his foot, he was uncomfortable around people with physical disabilities. Thankfully, his intrepid spirit helped him adjust to his prosthesis; however, he was underwhelmed by his device’s quality, and his desire for a better prosthesis spurred him to pursue a career path he’d never considered before—one that began with a minimum-wage job at a prosthetic manufacturer and ended with Garrison making a living as a certified prosthetist. Garrison is a proficient writer with an inspiring story, but his self-awareness and insight into disability give weight to his memoir. His sly sense of humor, meanwhile, provides a good balance to his heavier material, as when he reflects: “I was such a wild youth, before I lost my foot, that if I had ever gone into the military, I probably would have gotten into a lot of trouble….I would be hiding from the military authority way up in the mountains somewhere with two beautiful Asian women who loved me.” Overall, this book would likely be a valuable resource for anyone learning to embrace life with a prosthesis.

A quick but moving memoir of resilience.