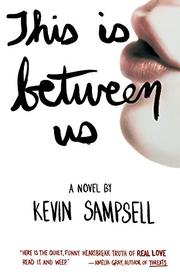 THIS IS BETWEEN US

The literary version of old Polaroids: moments in time that are little more than flashes of a dysfunctional relationship.

In his debut novel, writer, bookseller and editor Sampsell (Creamy Bullets, 2008, etc.) strongly mimics his memoir (A Common Pornography, 2010) and short stories with a fragmented, splintered novel about a postmodern relationship. It’s all meant to be confessional and honest but comes off just like the experimental hipster lit that it mirrors. The unnamed narrator is a hotel clerk and a divorcee with a preteen son. While still married, he met a woman with a daughter, and that was that. He’s a real creep, obsessive about sex, seeking out pornography starring women who look like his partner. And yes, it’s still too early to be playing sex games pretending your member is one of the 9/11 airplanes. Not to mention he’s the guy who says stupid things like “I wanted to become a room of air for you to breathe in.” She, meanwhile, is a depressive with mood swings who’s given to doing things like strapping on goggles before smashing up dishes in the kitchen. During the fragment when they’re separated, one has to wonder why the hell they would ever come back together. The book’s real sin, however, is that it all feels so counterfeit, a fantasy played out in bars and strip clubs. The kids are an afterthought—window dressing for the illusion of domesticity. Every now and then, readers get to meet the partner’s brother, Daniel, who’s prone to hitting on the narrator and masturbating for his entertainment. It’s all very poetic, though, and that’s another problem. “You and I found each other and tried to run away from our poisons and sadness,” Sampsell writes. “You looked for freedom. I looked for escape. Once a leaver, always a leaver. Sometimes I feel like we’re just keeping an eye on each other.”

An unpleasant, often exasperating melodrama about the great divide between two lovers.