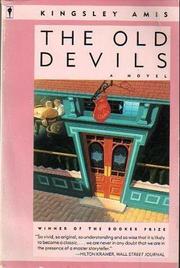 In this bilious and booze-sodden narrative (winner of the 1986 Booker Prize), Amis once again transforms insult, ridicule, and reaction into high comic art, much of it at the expense of his own kind for a change. But that explains the unusual degree of sympathy also in evidence here for the like-minded Welshmen (and women) who endure, with varying degrees of grace, the onslaught of old age. Malcolm Cellan-Davies, afflicted with bad teeth and bowel problems, spends his retirement translating Welsh verse, and meeting his mates, all ex-members of a defunct squash club, at a pub named "the Bible." These daily "Bible sessions" include Charlie Norris, an overweight, alcoholic restaurateur, and Peter Thomas, also obese, who's always on the lookout for "vulgarity, affectation, and shoddiness." All of which seem to arrive in South Wales with the return, after 30 years, of their old friend, Alun Weaver, a popular poet and, in one friend's words, an "up-market media Welshman" who has made quite a career of pontificating about "things Welsh" on TV. In search of his "roots," this "second-rate bloody ersatz" version of the justly celebrated Welsh poet, Brydan, is more interested in planting than sowing. Malcolm's wife, Gwen, Charlie's Sophie, and a number of other old flames all welcome the vain and selfish writer into their beds, thus bringing out into the open all the pent-up problems of these superannuated swingers. When the white-haired Don Juan dies an untimely death ("a rather raw occasion all round"), his charming and still beautiful wife, Rhiannon, rekindles a long-cherished affection of her own for Peter, who's been stuck for years in a loveless marriage with Muriel, a tart-tongued harridan in the Amis tradition. Plenty of boisterous pub crawls and witty chin-wags add up to vintage Amis.
Pub Date: March 1st, 1987
ISBN: 0060971460
Page count: 294pp
Publisher: Summit/Simon & Schuster
Review Posted Online: March 19th, 2012
Kirkus Reviews Issue: Feb. 15th, 1987

DIFFICULTIES WITH GIRLS
by Kingsley Amis