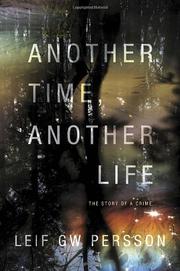 ANOTHER TIME, ANOTHER LIFE

Dark, politically charged thriller from Swedish crime writer Persson (Between Summer’s Longing and Winter’s End, 2010), one of many literary heirs of Stieg Larsson.

Anyone who was alive and kicking in 1975 is likely a much different person today, if in no other way than that the platform shoes and disco ball are now in storage. Certainly a person’s politics might be different—and attitudes about others, too, especially if you are, say, a Norwegian put into contact with Germans within living memory of the Nazi occupation. Persson’s newest starts off smack in the middle of a not uncommon scene in the Europe of 1975: a cadre of terrorists has seized the German embassy in Stockholm, demanding the release of prisoners, including members of the Baader-Meinhof gang. Things get ugly quickly; as the head of the homicide squad idly thinks, “The promised effects of the Stockholm syndrome, this good, consoling cigar, seemed more remote than ever.” A few hours in, and hostages and terrorists die. Or did they? The operation was so carefully planned that, it stands to reason, someone well placed both inside and outside the embassy had to have been in on it. Red herrings—perhaps better, Red Brigades herrings—ensue, as Persson unfolds a carefully plotted story that jumps to 1989 and the fall of the Berlin Wall, then to the near-present, crossing generations of investigators and government officials in the quest to find out who knew what—and who covered up what, and who killed whom. People change with the years—and they don’t. Persson himself figures in the proceedings, in the sly way that Alfred Hitchcock figured in his films. And while there’s humor, if mostly black—let “The one who had ended his life by his own hand and with the help of his service revolver to save society unnecessary nursing expenses and himself an undignified life” stand as a fairly typical example—Persson writes with unrelenting grimness, as if needing a strong dose of Mediterranean sunshine to cure the police-beat blues.

It helps to know something about the time in which the story is set, and who Olof Palme was, to appreciate the book. Still, a practiced, Larsson-worthy procedural.

THE SWORD OF JUSTICE
by Leif G.W. Persson
Mystery

FREE FALLING, AS IF IN A DREAM
by Leif G.W. Persson
Fiction

BETWEEN SUMMER'S LONGING AND WINTER'S END
by Leif G.W. Persson

THE GIRL IN THE ICE
by Lotte Hammer
Mystery

THE INTRUDER
by Håkan Östlundh
Mystery

FREE FALLING, AS IF IN A DREAM
by Leif G.W. Persson

THE MAN FROM BEIJING
by Henning Mankell
Nonfiction

THE MIND OF THE TERRORIST
by Jerrold M. Post
Fiction